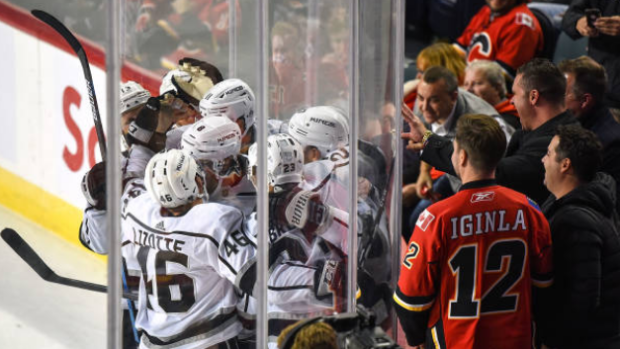 The Drew Doughty vs. Matthew Tkachuk reached a whole level of awesomeness on Tuesday night.

After Tkachuk scored late in the 3rd period to erase a 3-0 deficit and send the game to overtime, Doughty blasted home the game-winner in the extra frame with a little theatrics to boot.

Whether you're on Team Doughty, Team Tkachuk, or are just enjoying the feud between the two stars who don't like each other, you can't deny the entertainment it's provided hockey fans.

It would've been tough to draft up such a script on Tuesday, but for Doughty, he had something of this ilk in the back of his mind for quiet some time.

Check out this radio interview from September 2018, about what it would be like to put on a show in front of an opposition crowd.

Drew Doughty got the last laugh in the latest chapter of the Doughty vs. Tkachuk feud. 🤫 pic.twitter.com/EmJj4TAqrq

"As much as I love getting booed every time I touch the puck, you kinda wanna shove it in their faces, Doughty told reporters post-game. "And before that overtime started I knew I had a great opportunity and I was like, 'Every time I get that puck I'm ripping it.'"

Mark your calendars for October 19th in Los Angeles when Doughty and the Kings welcome Tkachuk and the Flames to Hollywood, where there's likely to be more drama.