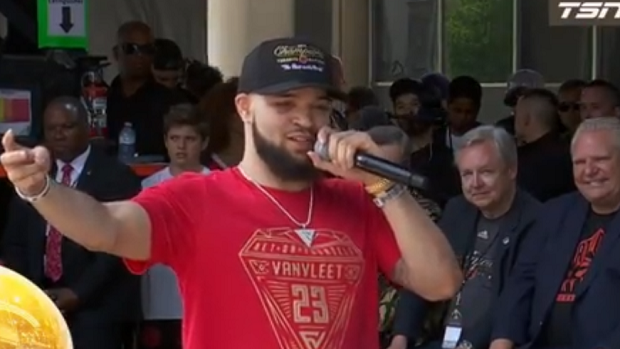 They're on your side now, Freddy

There’s no contesting it.

Wow! The lineup for #Toronto @MapleLeafs fans to get into #mapleleafsquare for game 6 is around the #ACC #leafsnation @TorontoStar pic.twitter.com/kag6p78mvW

#Raptors fans singing “We are the Champions” in Jurassic Park is everything 🥺🎵 pic.twitter.com/hpHZ0838WO

Raptors fans are camping out in line for Jurassic Park *days* in advance 😱 pic.twitter.com/ARjBL8eN37

Sometimes, though, the passion definitely turns a little hostile and vicious when things don’t go the way they’re hoping they will (we’re sorry, Jake Gardiner). To be fair, we get it. Toronto fans have been waiting a *long* time for a major sports team to secure a championship.

The Toronto Raptors secured Canada’s first ever NBA title, defeating the Warriors dynasty in six games, and fans haven’t been able to contain their excitement that the drought is finally over, showing up in masses to support their boys.

Toronto is a zoo pic.twitter.com/35x13PHL3x

In the midst of the celebrations, Raptor Fred VanVleet couldn’t help but have a little fun with Raptors fans in regards to how quick they are to rip into the team when they don’t perform.

Freddy, we think they’ll be celebrating all summer long.