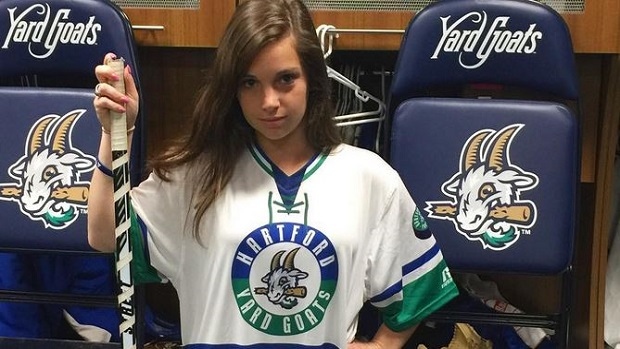 The Colorado Rockies’ Double-A affiliate, the Hartford Yard Goats, announced before the season that they would be hosting a Hartford Whalers Alumni Weekend this season from July 14-16.

Hockey is back in Hartford, and Bob Crawford is ready! #Whalers Alumni Weekend July 14-16. BE THERE!

Since the team rocks the same colours as the Hartford Whalers did during their existence, the team doesn’t have to change much in terms of colour scheme.

However, they are giving their logo a hockey makeover for the special weekend.

Last week, the Yard Goats went one step further and officially unveiled the hockey-themed jerseys they will be rocking during the weekend when they host the Trenton Thunder, the Double-A affiliate of the New York Yankees.

While the team didn’t need to make any adjustments to the colour scheme, they did a nice job switching it up from their normal uniforms.