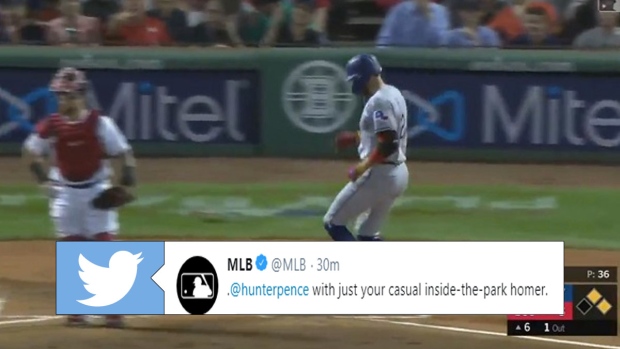 Hunter Pence started his MLB career with 20 or more home runs in seven of  his first eight seasons and totaled 90 or more RBI in four of those seasons, but the two-time World Series champion saw a decline in his overall stats the past few years due to various injuries.

However, at 36-year-old, Pence looks like his old self again and is putting up numbers with the Texas Rangers like it’s 2011.

The three-time MLB All-Star entered Tuesday night’s game against the Boston Red Sox batting .282 with a .333 OBP to go with 13 home runs and 41 RBI in just 50 games, and he added to his totals in an impressive way midway in the top of the 6th inning.

With one man on base and one out in the inning, Pence drilled a shot to right field that got by Brock Holt and rolled around on the warning track as both Pence and Nomar Mazara came around to score and add to the Texas Rangers’ lead.

This is the first time Pence has hit more than 13 home runs in a single season since the 2014 campaign, and has potential to finish with 90 or more RBI for the first time since 2013 at this pace.