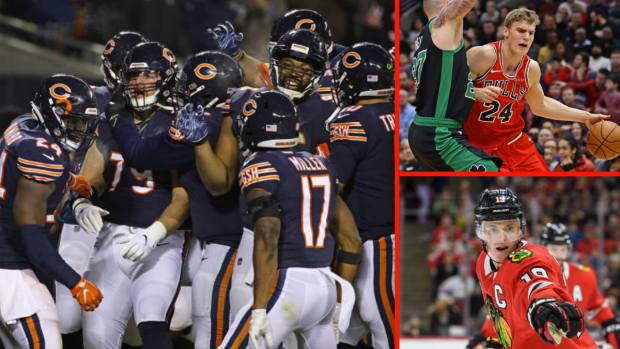 It’s been a strange season for Chicago sports fans. Their former dynasty on the ice, the Chicago Blackhawks, continues to fade into darkness, now sitting in last place in the league. Meanwhile, the Bulls are less threatening than they’ve been on the court in a long, long time and continue to watch former star Jimmy Butler thrive in Philly.

On the other hand, the Chicago Bears are  exceeding their expectations. On the arm of newcomer quarterback Mitch Trubisky, the Chicago Bears have managed to win 9 of their 13 games, which is likely more than people were expecting.

Chicago fans would be ecstatic to hear that, but they would also be bummed to hear their beloved ‘Hawks have the same amount.

It's Dec. 10. The Bears and Blackhawks have the same amount of wins.

There is no justifying this if you’re a Blackhawks fan. The Bears only play once a week, and while they started almost a month earlier, they have only played 13 games. The ‘Hawks have played more than twice the amount of games, 31 to be exact.

Er, how does Chicago feel about this? If they could choose to be at this point or not before either season began, would they take it?

Just to make things even more confusing, the Bulls are doing worse than both teams.

To summarize, somehow the Chicago sports team with the most wins is the football team that only plays once a week…

which is three more than the Bulls have…

Honestly did not see that one coming.

In fact, I probably would have thought it absurd had it been suggested in August.

It’s so hard to hang up the sweater when Kaner and Keith are still on the ice... but that is an awakening number right there...

For the sake of the ‘Hawks and the Bulls, let’s hope they manage to surpass the Bears in wins by the end of the season…