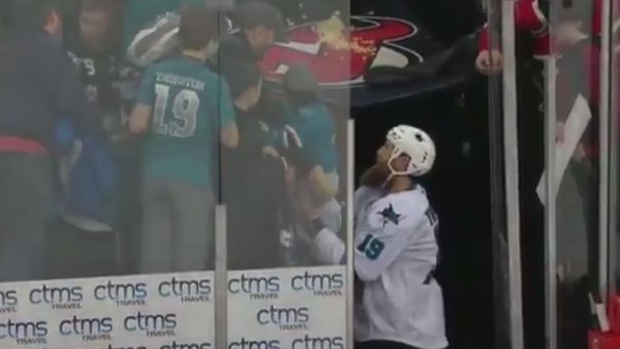 When the San Jose Sharks stripped Joe Thornton of his captaincy back in 2014, a lot of hockey fans assumed his time in San Jose was coming to an end. However, he has proven everyone wrong since then, and seems like he has been having more fun than ever over the past few years.

The Sharks have pretty much been in charge of the Pacific Division since the beginning of the season, and currently have a 5 point lead on the Anaheim Ducks after 57 games. Despite their success all season long, the team hit a rough patch at the beginning of February. They opened up the month with a win over the Vancouver Canucks, but then went on to lose the next four games.

On Sunday, the Sharks snapped their four-game skid with a 4-1 win over the New Jersey Devils. Jumbo Joe was feeling great about his team’s victory and the fact that he scored his second goal in three games, so he decided to let some lucky fans who made the trip to the Prudential Center in on the team’s celebration.

The kid looked very confused and a little frightened at first, but he seemed to loosen up once his dad joined in on the fun. The young fan was probably just hoping for a fist bump from some of his favourite players or a puck or game-used stick at most, but instead he got the ultimate prize, a trip inside the Sharks’ locker room to celebrate with the players after a big victory.