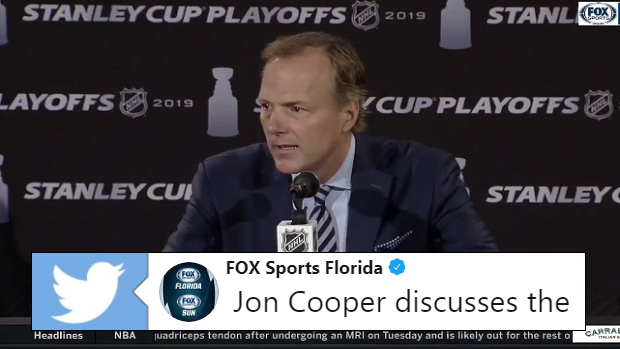 Jon Cooper address the Lightning's historic opening round sweep at the hands of the Blue Jackets. , Fox sports Florida/Twitter

And just like that, the Tampa Bay Lightning’s historic 2018-19 campaign has come to an end.

On Tuesday night, the Columbus Blue Jackets sent the Lightning home early after completing the sweep on home ice. After leading the NHL (by a landslide) with 319 regular season goals, T-Bay posted just 8 in the series while giving up 19. The hockey world is still trying to comprehend what exactly happened, but Lightning head coach Jon Cooper seems to have a pretty strong understanding that his team plain and simply got outplayed. He shared some pretty devastating words in his post-game press conference following the final loss.

#JonCooper reflects on the #Lightning being swept in the first round

Jon Cooper discusses the disappointing end to the @TBLightning's historic season after being swept by the Blue Jackets. #TBLvsCBJ #StanleyCup #GoBolts #NHL pic.twitter.com/US7URLHx1v

“For six days in April, Columbus played better than we did.” Yikes.

While Cooper was able to make some sense of what happened, the Lightning’s Twitter account had a little more difficulty. They issued a devastating, heartfelt message to fans, explaining that they just didn’t have any words for what happened.

Them and everyone else who watched the series!!!!

While Cooper’s presser was a bit more on the somber side, Jackets head coach John Tortorella’s couldn’t have been more opposite. The 60-year-old revealed that he actually had beer poured on him mid-game.

The Lightning won the regular season series 3-0, outscoring the Jackets 17-3 in those contests. But hey, it’s all about getting hot at the right time.