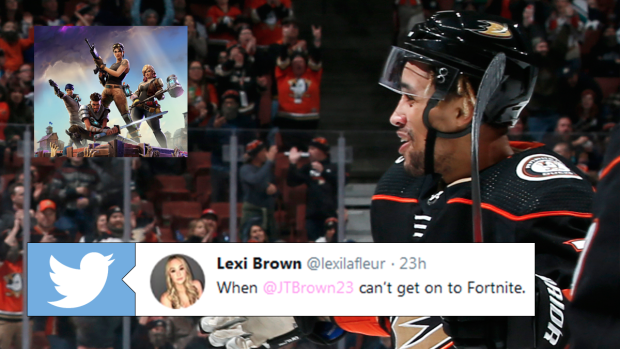 Fortnite has not only taken over online, it's begun to stretch its reach into the NHL.

As revealed by Zach Hyman, the game that most of the young Maple Leafs are playing these days is Fortnite, and they're certainly not the only ones putting time into the co-op sandbox game. Last weekend, J.T. Brown took the time to chirp Brock Boeser following his performance in the All-Star accuracy competition, but his quips had nothing to do with hockey. It was about the Canucks rookie's skills in fortnite, which apparently don't compare to his on-ice ability.

Wednesday, Brown's wife, Lexi, got in on the Fortnite fun, tweeting out a relatable meme about J.T.'s playing habits, featuring their daughter, Lily.

One of the best part about Fortnite is the fact that you don't have to wait for the next round, you just switch game lobbies. But from time to time, servers can be down, and you can’t play when you would like. Happens in the best of games, but it's still cause for a grimace.

In case you're interested in watching J.T. showcase his Fortnite skills, you can check out his Twitch page, where he streams quite regularly.