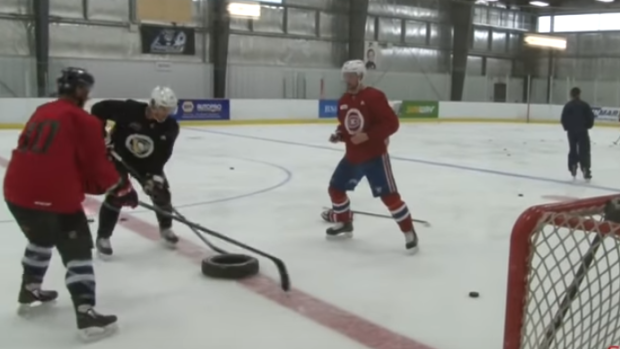 Don’t look now, hockey fans, but NHL training camps are less than a month out.

There was once a time where training camp was for players to shake off their summertime rust and slowly work their way back into game shape. But with how advanced training, nutrition and overall skill levels increasing by the year, players are ramping up their offseason workouts hoping to come into camp in the best shape possible. Fitness is just one of many elements that can make it or break it when rosters are trimmed down as camp progress and pre-season games start to give the coaching staff an idea on who’s going to be battling for certain roster spots come opening night.

Sidney Crosby is on the exact opposite end of that spectrum. The 31-year-old was recently named the best Nova Scotian athlete of all-time back in late July, receiving 31 of 32 first place votes.

Although he didn’t have a Stanley Cup to bring back to his hometown of Coal Harbour this particular summer, Crosby spent a good chunk of the months back in his home province and was recently spotted on the ice with fellow Nova Scotians Nathan MacKinnon and Brad Marchand.

Partially what makes Crosby such a generational talent is his constant drive to get better and work on certain elements of his game. You’ll rarely ever see him in the public spotlight, as he’s too dedicated to working out on the gym or fine-tuning his game out on the ice.

Thanks to John Moore, a Nova Scotia video journalist, we have some more fantastic footage of Sidney skating at a rink in Bedford, Nova Scotia, along with Logan Shaw, Shane Bowers, Andrew Gordon and Shawn O’Donnel, and goaltenders Anthony Peters and Corbin Boes from this past Wednesday.

Around the 40-second mark is where it starts to get good. Just watch him go in on the 2-on-1 and go down on one knee to finish off the cross-ice feed. The play he makes around the 1:04 mark when an errant pass gets away from his is pretty nifty, as he puts his stick down flat to receive the puck.

He then shows off his defensive skills from doing the classic sprawl move you can pull off in the EA Sports NHL video game series. Then, he starts picking corners on and doing wraparounds on the poor goalies.

Check out the drill he does with the tire at the 2:09 mark. It’s a great way to emulate a broken play around the net by mimicking a loose puck popping out around the crease, or lifting a player’s stick and getting a shot off in a timely manner. Watch how quickly Crosby flips up the tire and fires the puck in a hurry, both with his forehand and backhand.

Jump ahead to the 2:40 mark and you’ll see one of Crosby’s best attributes on display: his lower body strength, particularly how strong he is one his edges when weaving around the net with the puck. That defender and goalie didn’t have a chance. The slow-mo shot of him going high glove and then his backdoor feed over to Logan Shaw are just incredible.

Whether you have him as the greatest player in the game, or second to Connor McDavid, it’s always a treat to watch Crosby’s skills on full display from ice level, even if it’s summertime drills. You think he’s motivated to get the Penguins back into the Stanley Cup Finals? We certainly think so.