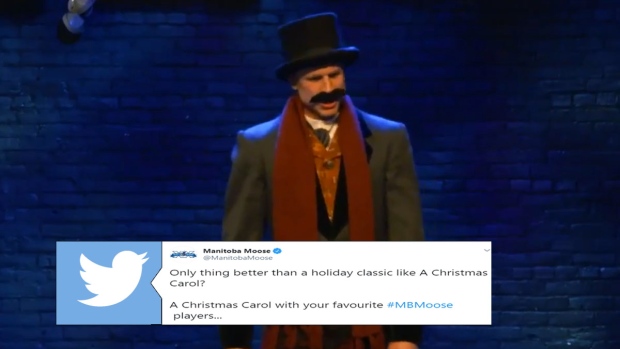 Now that the calendar has flipped over to December, people are really getting into the holiday spirit.

From sharing their favourite holiday memories to giving back to the community, professional athletes and teams are finding all different ways to get into the holiday spirit.

The Manitoba Moose did things a little differently, as a bunch of the players showed off their acting skills as they tried out for roles in ‘A Christmas Carol’.

Only thing better than a holiday classic like A Christmas Carol?⁣ ⁣ A Christmas Carol with your favourite #MBMoose players... ⁣ ⁣ What could go wrong?⁣ ⁣ Head over to our Twitter or FB page to watch the full vid

Only thing better than a holiday classic like A Christmas Carol?

A Christmas Carol with your favourite #MBMoose players...

What could go wrong? pic.twitter.com/P3PzIMJgvA

They’ve managed to top last year’s holiday video, which featured the players picking up shifts around the rink to help out the workers.

In this year's festive video the 2018-19 #MBMoose rookies are helping out around the rink so everyone can enjoy the season.

Happy Holidays to all, from the Manitoba Moose! #GoMooseGo pic.twitter.com/Fsd7up1441

The Moose might be the champs when it comes to creating festive videos.