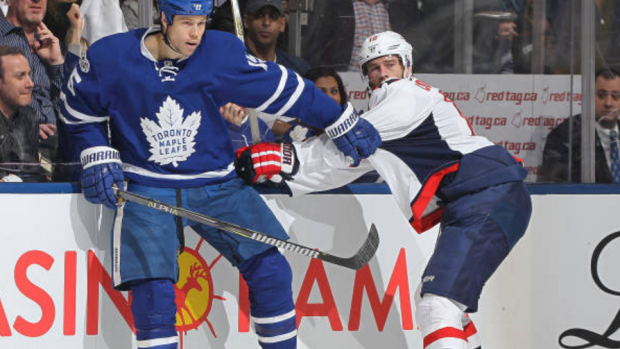 For the first time in the Leafs and Capitals series, someone has a chance to end it as Washington can advance to the second round with a win on Sunday in Toronto.

The #Capitals get a quick goal in OT to beat the #MapleLeafs 2-1 and take a 3-2 series lead.

We imagine the game will be a close one as four of the five games up to this point have gone to overtime and all of them have been decided by one goal.

There will also be plenty of nerves as the Leafs' rookies will be in their first career elimination game and the Capitals players might have thoughts of another first round exit if Toronto gets up early.

Ahead of the pivotal game, head coach Barry Trotz provided this imagery on closing out the series.

Trotz on wanting to close out #Leafs: "If you have the opportunity to push someone off the cliff, you want to push them off."

The hockey world had some fun with that golden quote judging by these tweets:

@SWhyno I am avoiding all cliffs near Barry Trotz.

@SWhyno Note to self: Don't go hiking with Barry Trotz.

when you hear barry trotz wants to push you off a cliff pic.twitter.com/I6FvErr3IW

As great as all of those reactions are, Matt Martin easily had the best one:

Trotz: "You get an opportunity to push someone off a cliff, you need to push" Matt Martin: "Makes me not ever wanna go hiking with the guy."

Camping, hiking, pretty much any outdoor activity that is close to a cliff is what Martin's getting at.

The hockey world now waits for Sunday to find out if the Capitals will push the Leafs off the cliff or if the series is headed to seven.

Mike Babcock on going back to Wash for a Game 7: "In my mind and in my heart, that's what I know is going to happen."