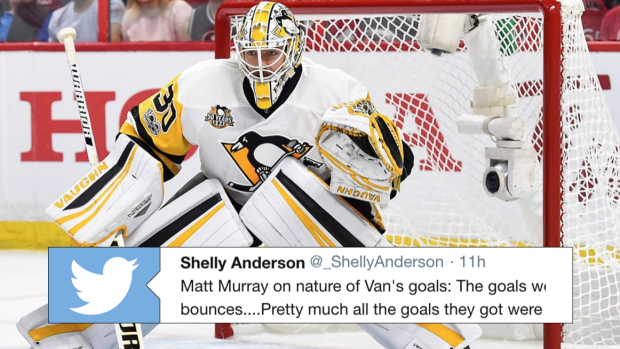 Fans of the Vancouver Canucks have to be extremely happy right now for a number of reasons.

For starters, if the season ended today, the Canucks would be in the playoffs and rookie Brock Boeser has been a huge part of the team's success so far this season.

Brock Boeser is the third different @Canucks rookie in the last 26 seasons to record at least one goal in four consecutive team games. #NHLStats #VANvsPIT pic.twitter.com/Ex3EWHO4af

Wednesday night, the 20-year-old scored two goals for the second consecutive game as the Canucks crushed the Penguins 5-2.

Boeser extended his point streak to five games and continued his dominance against Matt Murray and the Penguins as he scored three goals and added an assist on November 4th against Pittsburgh.

After that game earlier this month, Murray attributed "luck" some of the Boeser and company scored, so fans retaliated after Vancouver's latest win.

If Vancouver fans didn't like what Murray had to say before, there's no doubt they'll be angry with what he had to say about after the loss this time around.

Matt Murray on nature of Van's goals: The goals were just weird bounces....Pretty much all the goals they got were kind of hilarious. That 1 with the broken stick & then off of Phil, that’s about as unlucky as you can get. You’ve got to look at some of those goals & just laugh.

There were a couple of bounces that led to goals for the Canucks, but saying "all the goals they got were kind of hilarious" doesn't seem accurate at all.

@TRana87 yeah "pretty much all the goals" except for half of them...

i this a joke

So the 5 goals Boeser scored on you in 2 games were all flukes? lol

We're not sure if the quote takes what he said out of context, but here's the soundbite so you can decide for yourself:

Matt Murray characterized the goals the Penguins gave up tonight as "hilarious." Here's the whole quote, for the sake of context. pic.twitter.com/iOtbMv8F8x

Either way, the Penguins are currently in a playoff spot and one point back of the Islanders for third in the Metropolitan Division and Murray and company will try to bounce back when they take on the Bruins Friday.