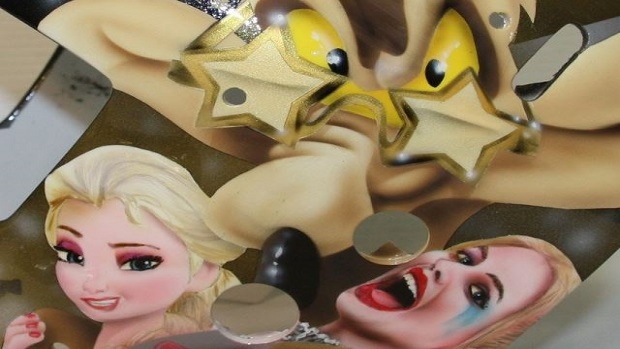 Arizona Coyotes goalie Mike Smith is heading to his first NHL All-Star Game this weekend in Los Angeles. As one of the two goalies representing the Pacific Division and the only player representing the Coyotes, Smith decided to make the weekend as special as possible and give his mask a Hollywood makeover.

For Smith’s NHL All-Star Game mask, the 34-year-old turned to his friend and the longtime artist of his masks, David Arrigo, to get the job done. Smith wanted to make sure his mask was “dark and has a great deal of bling to it”, and Arrigo certainly delivered.

The left side of Smith’s new mask features Wile E Coyote, a key feature on his mask since joining the Coyotes, Frozen’s Princess Elsa and Margot Robbie as Harley Quinn of Suicide Squad walking down the Red Carpet.

The right side of his mask features his family members, who all happened to get a Hollywood makeover as well.

The front of his Hollywood-themed mask features an awesome film design.

While the back of the mask includes the biggest Hollywood staple of all, the Hollywood sign. However, that sign also got a little makeover on the mask.

This is one of the cooler masks we have seen and is another masterpiece by David Arrigo. It’s definitely going to look sharp this weekend when Smith hits the ice in front of a star-studded crowd in LA.