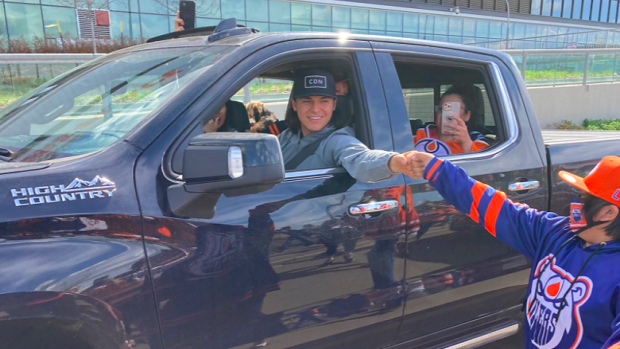 Following the disgusting racist comments that the Edmonton Oilers’ Ethan Bear had to endure after the Oilers were swept by the Winnipeg Jets, an encouraging amount of the hockey community rightfully took a collective stand against racism in support of Bear.

"I'm here to stand up to this behaviour... I'm proud of where I come from. I'm proud to be from Ochapowace First Nation. I'm not just doing this for myself. I'm doing this for all people of colour & for the next generation."

Ethan Bear represents both our game and his Indigenous heritage with dignity and pride. He, and all people from Indigenous backgrounds, deserve to feel empowered and respected on and off the ice. We stand with Ethan and his family in denouncing hate. pic.twitter.com/BQazdfjS1B

Proud of this young man Ethan Bear leading the way for our Indigenous communities. I’ve experience racism myself at the @NHL level. Those who are geared towards racism are obviously dealing with mental issues themselves. You know who you’re ! Help is out there !! @EdmontonOilers pic.twitter.com/CuECkfIigf

Well said, Andrew.
Beyond terrible and unacceptable that Ethan Bear should be subjected to that.
Let's support Ethan Bear ! https://t.co/pdf06AyAX4

Though the situation was discouraging, it’s definitely nice to see the hockey community stand up for what’s right.

Edmonton Oilers fans also took a stand against the racist behaviour this week when they held a rally for Bear outside of Rogers Place. The No Room for Racism rally had an excellent turnout, and Bear himself got the full celebrity treatment from fans.

Awesome to see Ethan Bear do a drive by to salute fans supporting him at big rally outside Rogers Place! #ethanbear #yeg @ctvedmonton pic.twitter.com/PH3lGXto1S

Photos from the No Room For Racism rally on May 29 in front of Rogers Place. See more photos and read the story at Windspeaker: https://t.co/X9f7gaUsa7#yeg #yegdt #ethanbear #edmontonoilers #edmonton #hockey #racism #antiracism #rogersplace #photojournalism #yegphotographer pic.twitter.com/Lt2hMIBb35

📷 Photos from the No Room For Racism rally on May 29 in front of Rogers Place in downtown Edmonton. The rally denounced all racism, and was organized in the aftermath of Edmonton Oilers defenseman #74 Ethan Bear being barraged with racist... https://t.co/Ks1bbH1S6s

A heart appeared over the rally for Ethan Bear, outside of Rogers place. Incredibly proud of you Ethan! 💙🧡 lelele. @EdmontonOilers #IStandWithEthanBear #Yeg #Oilers pic.twitter.com/EPaHh6jqYj

Shout out to Oilers fans for having Bear’s back.

There’s no room for racism in hockey, and what Ethan Bear had to face was completely unacceptable.