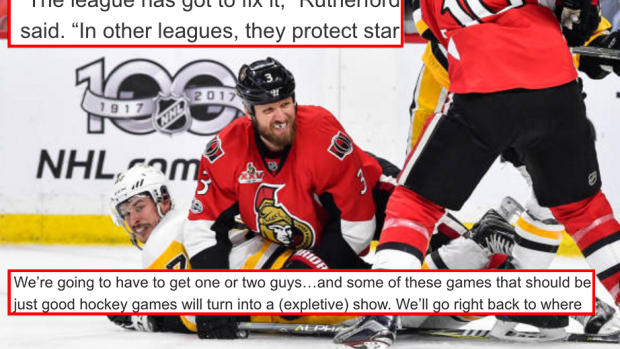 For the second straight season, the Pittsburgh Penguins are in the Stanley Cup final, but they've faced a lot more adversity this time around.

Injuries have been the biggest issue for the Penguins, the biggest being Sidney Crosby's injury in the second round of the playoffs after he was hit in the head by Matt Niskanen.

After missing Game 4, #Crosby is back for the #Penguins.

Crosby didn't miss a lot of time, but the hit and the aftermath of it has been one of, if not the main talking point throughout the postseason.

Sadly, it's kind of become the norm in the NHL that star players aren't protected by the league, and Penguins General Manager Jim Rutherford shared his strong feelings about that topic with The Hockey News:

“I hear year after year how the league and everyone loves how the Penguins play,” Rutherford told the Hockey News. “'They play pure hockey and they skate.’ Well, now it’s going to have to change and I feel bad about it, but it’s the only way we can do it. We’re going to have to get one or two guys…and some of these games that should be just good hockey games will turn into a (expletive) show. We’ll go right back to where we were in the ’70s and it’s really a shame.”

“The league has got to fix it,” Rutherford said. “In other leagues, they protect star players. In basketball, they don’t let their top players get abused.

"And in our league, well the thing I keep hearing is, ‘that’s hockey. That’s hockey,’ No, it’s not.”

Rutherford doesn't only want his stars, Crosby and Evgeni Malkin, to be protected, but all stars in the NHL so the game doesn't go back to how it was in the '70s.

Crosby also shared his feelings on being the "target" with The Hockey News, and here's what he had to say:

“Yeah, it’s a challenge,” Crosby told the Hockey News of being a target. “That’s the challenge of playing in the playoffs. I guess you understand that after going through different experiences…that’s the way it is. It’s not always easy to accept that, but at the end of the day, you have to and you can’t get caught up in it and ultimately it’s about winning games. Getting caught up in that and getting frustrated isn’t going to lead to winning games. That’s kind of my motivation as far as staying focused. You just can’t allow yourself to get too caught up in that regardless of how bad it gets. You just have to keep going.”