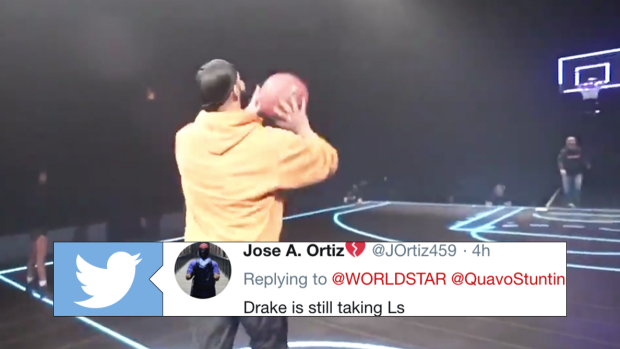 On Sunday, Quavo posted a video of he and Drake playing basketball against each other.

It wasn't a one-on-one game, but they were on opposing teams and Quavo's caption for the video was "Y R N vs O V O Preseason Footage."  One day later, we've got another clip of the two going at, only this time there was some money on the line.

(Warning: Video NSFW due to explicit language from the song playing in the video)

Quavo's half-court shot won him $10k from Drake, who just missed the shot after Quavo nailed his.

Cmon we all know Quavo can do anything, why even go against him

AM I THE ONLY ONE WHO WENT NUTS WHEN @QuavoStuntin MADE THAT LOOK EASY AS SHIT?!?!?!?!

Drake and Migos were in Kansas City for the first stop on their "Aubrey and the Three Migos" tour, so it's probably safe to assume there will be a lot more basketball played as the tour continues.