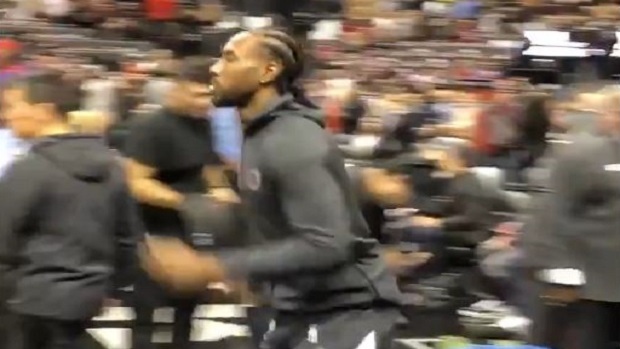 Kawhi Leonard only spent one season with the Toronto Raptors, but it was a season that Raptors fans will never forget.

On Wednesday night, the two-time NBA Finals MVP makes his first trip back to Toronto since joining the Los Angeles Clippers, and you can bet fans were excited to see him back in town even if he was wearing another team’s colours. As he hit the court with his teammates for warm-ups, fans who arrived early welcomed the former Raptor with a standing ovation well before the game even got started.

Kawhi Leonard immediately gets a Standing O as he steps on the court in Toronto 👏👏 pic.twitter.com/KgeXeG0f6H

It wasn’t an arena-wide standing ovation, as fans were still making their way into the building and to their seats, but the fans who did show up early to catch the warm-ups welcomed him back with open arms.

Kawhi Leonard and the Clippers hit the court for warm-ups in Toronto. pic.twitter.com/r8rVhnNm9w

Once the game gets started, you can bet he’ll get a standing ovation, at least when he accepts his ring, but after that he becomes the enemy again for the night.