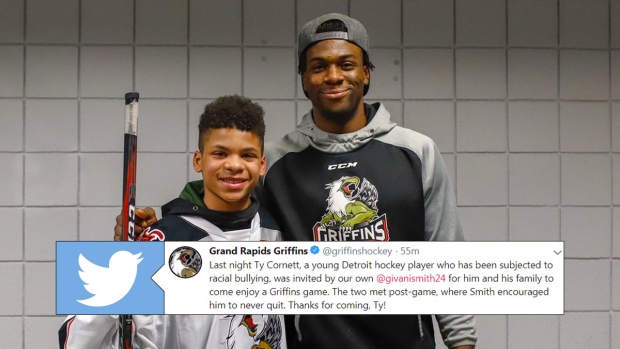 Being a professional athlete doesn’t automatically make you a good person, but using your platform to help better the lives of other people certainly does.

Givani Smith was selected 46th overall by the Detroit Red Wings in the 2016 NHL Entry Draft and is currently playing his first full season in the AHL with the Grand Rapid Griffins. The Thornhill, Ontario native played in the OHL last season, so he’s getting his first taste of what it’s like to be a professional for a full season. As a way to pass time on off-days, Smith spends a lot of time giving back to the community and used his platform during Black History Month to try to inspire young kids in the community.

"You don't have to be a certain skin color or certain person to play the game of hockey... It's a game and if you love it, it'll love you back."https://t.co/ccP8AVS0AK

On Friday night Smith was at it again as he stepped up in a big way for a Detroit hockey player by the name of Ty Cornett, a young man who has recently been subjected to racial bullying both on and off the ice, by treating Cornett and his family to the ultimate hockey experience.

Last night Ty Cornett, a young Detroit hockey player who has been subjected to racial bullying, was invited by our own @givanismith24 for him and his family to come enjoy a Griffins game. The two met post-game, where Smith encouraged him to never quit. Thanks for coming, Ty! pic.twitter.com/ty9TTMeFgy