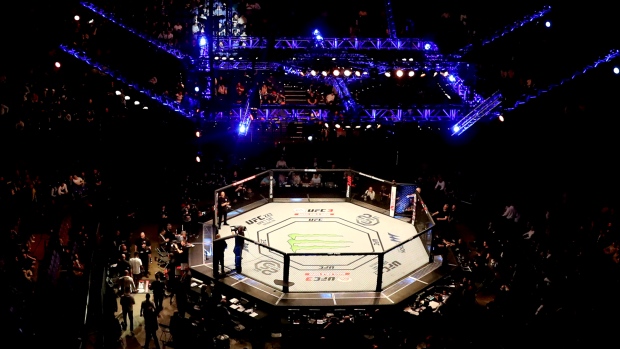 Ryan Benoit has been removed from this weekend's UFC card after a scary scene at weigh-ins.

Benoit missed weight by 3 pounds on his second attempt Friday morning, coming in at 129 pounds for a flyweight bout in Las Vegas. He was scheduled to fight Zarrukh Adashev at UFC Fight Night on Saturday, but that bout has now been canceled due to a Benoit weight management issue, UFC officials confirmed with ESPN.

On his first attempt, a visibly dehydrated Benoit was helped to the scale by coach Jamie Crowder and was unable to stand there under his own power long enough for Nevada State Athletic Commission (NSAC) chief assistant Jeff Mullen to register his weight. A wobbly Benoit was helped off the scale by UFC security and Crowder.

Benoit was then taken backstage at the UFC Apex to be looked at by a doctor. About five minutes later, Benoit returned and was helped onto the scale by Crowder and UFC security. Still wobbly, Benoit was able to stay still on the scale long enough for Mullen to register the weight at 129 pounds.

Benoit was transported to a Vegas hospital from the Apex after the second attempt on the scale. He was discharged later Friday and is scheduled to fly home tomorrow, according to his manager, Oren Hodak of KO Reps.

This is not the first time Benoit has had weight issues. He also missed weight by 3 pounds before a November 2017 fight with Ashkan Mokhtarian, but that fight remained on the card and Benoit won by knockout.

"Unfortunately I had a situation arise during the conclusion of my weight cut which resulted in my bout being cancelled," Benoit wrote in a statement posted to Instagram on Saturday. "Everything was going well and we didn't think hitting 126 was going to be a problem. It's devastating to not compete tonight and earn a paycheck. It's very unfortunate for my opponent and the promotion. Nobody wins in this situation."

A heavyweight bout between Ben Rothwell and Philipe Lins has also been pulled from the card. Per the UFC, Lins was not medically cleared to compete.

Diego Ferreira missed weight for a scheduled bout with Gregor Gillespie, weighing in at 160.5 pounds -- 4.5 pounds overweight -- for a lightweight contest. The bout will remain on the card, but Ferreira will forfeit 30% of his purse to Gillespie.

Both main event fighters made weight successfully. Marina Rodriguez weighed in at 125.5 pounds and Michelle Waterson came in at 125 pounds for the scheduled flyweight bout.