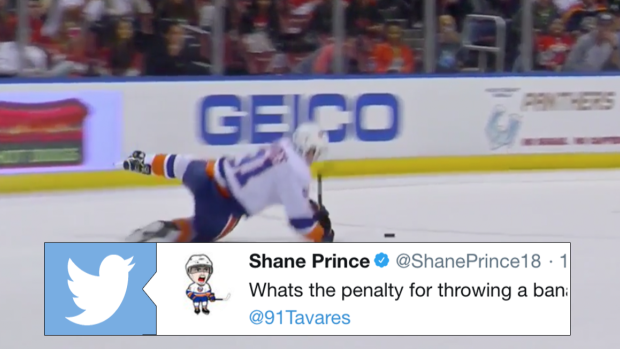 The atmosphere of a shootout in hockey is pretty exciting.  If you're a shooter or goalie, all eyes are on you as fans and players are silently awaiting what will happen.

One of the worst things that can happen to a player coming down the ice to try and score in the breakaway contest, though (aside from not scoring, is for him or her to slip and fall.

Monday night, John Tavares of the Islanders discovered that fact for himself as he got tripped up by the ice, got up and didn't score.

Tavares with the fall over and miss tactic... didn’t work

We're sure Tavares' teammates had some fun with the fall, and after the game Shane Prince decided to roast him on Twitter, too.

Whats the penalty for throwing a banana peel on the ice during a shootout? @91Tavares

Did anyone suddenly get Mario Kart flashbacks?

You have to love the fact that Prince had some fun with the situation, especially since the Islanders were able to overcome the fall and win in the shootout.