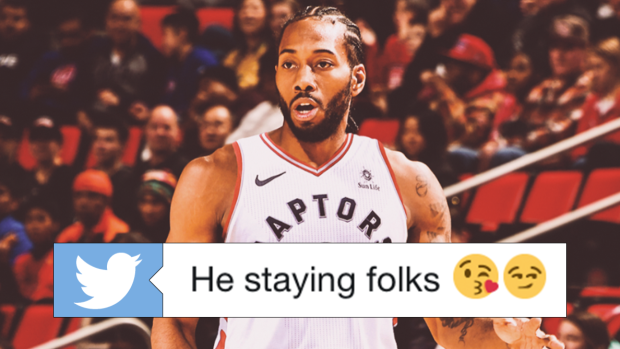 The one question every Raptors fan wants the answer to as soon as possible is will Kawhi Leonard sign a long-term deal with the Raptors.

The 27-year-old was traded to the Raptors earlier this summer, but everyone thinks he has his sights set on Los Angeles after this season, meaning he'll be in Toronto for just one season.

In situations like this, any little piece of news is going to elicit a reaction from fans and that was the case when Peter Yannopoulos of RDS reported that Kawhi is buying, not renting a house in Toronto.

Kawhi Leonard has bought ( not rented) a new home in Toronto. Good news for the Raptors. #RDS #TSN #NBA

With all due respect, the Toronto housing market is lower than it has been a while. He stands to make a profit in a year especially at 30+% USD

Is he supposed to sleep in the locker room?

@KyleBarretto1 so ready for this!!

You rent if you’re not serious, just like what David Price (baseball) did. That is why this is a big news to Raptor fans.

Why would he buy? If he truly was dead set on leaving after this season, why go to all the trouble and paper work of buying a home only to sell it 8 months later? With the money he has, renting would be the best option. Maybe he is keeping an open mind.

Kawhi BOUGHT a house in Toronto. Not rented. BOUGHT. Why would you buy a whole ass house just for 1 year?

bro Kawhi Leonard still drives the 1997 Chevy Tahoe that he had since high school but went and bought a whole house in Toronto? smh he might actually be thinking about re-signing

The good news is the Raptors have time to convince Kawhi that Toronto is not only an incredible city to play in, but a place in which he can compete for a championship year in and year out.

The bad news is that until he signs on the dotted line, these reports are going to drive Raptors fans crazy.