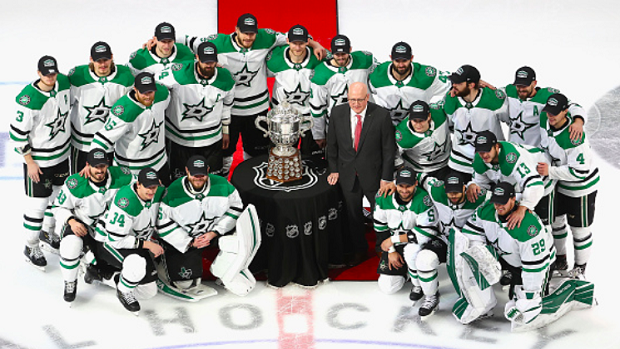 The 2019-20 season started as one to forget for Dallas Stars fans, but instead it has turned out to be a season they’ll never forget.

Dallas started the season 1-7-1 and topped the previous franchise record for worst start to the season, which was set by the Minnesota North Stars during the 1990-91 season.* But, things started to click mid-October and then the Stars started to roll. Suddenly they looked like an entirely new team and were quickly back into the race for the division lead.

Despite winning seven games in a row and 17 of 23 games, the Stars made a sudden change on the bench as they dismissed head coach Jim Montgomery and replaced him with Rick Bowness.

NEWS: Jim Montgomery has been dismissed as the team’s Head Coach.

It took them a few games to get rolling under Bowness, but once they settled in they picked up where they left off with one of their biggest wins being on the big stage at the Winter Classic.

By the time the season was suspended due to the COVID-19 pandemic, the  Stars were on a six-game losing skid but remained in a top-four spot in the Western Conference based on winning percentage.

When they got back on the ice in the Edmonton Hub, the Stars picked up where they left off five months prior and lost their first two round robin games. They ended up drawing the Calgary Flames in the first round and, even though they finished ahead of the Flames in the standings, a lot of people doubted them to get by Calgary.

We're not just here to play

After losing two of the first three games, the Stars won the next three to send the Flames packing, which included seven straight goals after going down 3-0 in Game 6 to seal the deal. That was the last time they would trail in a series during the playoffs, though, as they’ve gone 11-4 since Game 3 of the first round.

They had one 20-goal scorer and one 50-point scorer during the regular season. Their backup goalie has filled in as a full-time starter for the first time in his career.  A second-year defencemen is leading the team in playoff scoring. Their head coach is an interim. But they’re making it work.

*Thanks to the Clarence Campbell Conference being extremely underwhelming that year, the North Stars slipped into the playoffs with a 27-39-14 record and went all the way to the Stanley Cup, where they lost to the Pittsburgh Penguins in 6 games.