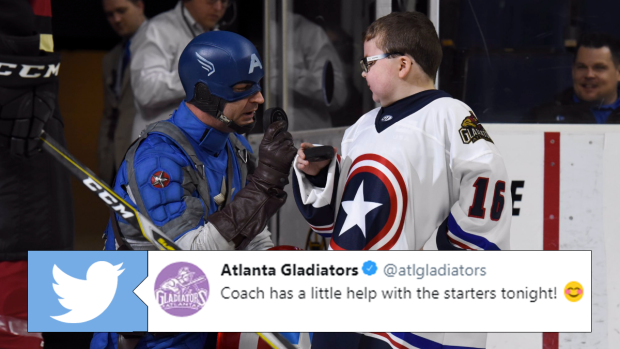 The Atlanta Gladiators were playing the Norfolk Admirals in an ECHL regular season game, with not much out of the ordinary. Not much, except for one particular person in attendance. Ethan McClean was experiencing his hockey dream.

Ethan, 10-years-old From Ballymena, Northern Ireland, is diagnosed with Duchenne Muscular Dystrophy. The genetic disorder causes muscle weakness early on in life, and can eventually lead to weaknesses in the heart and repertory muscles as well. Despite this, Ethan was surrounded by strength on Friday when he got to attend the game.

Clad in his custom Captain America jersey, one that the Gladiators had sent to him following their Super Hero night last year, Ethan got to be around the team all day long.

This special day for Ethan included attending morning practice, calling out the starting lineups before the game, hanging out with the team, and even dropping the ceremonial first puck. Oh, and he got to meet Captain America as well – we’re sure he liked Ethan’s jersey!

Coach has a little help with the starters tonight! 😊#DreamsComeTrue @team_mcclean pic.twitter.com/qYcRGGbbGQ

What’s better than dropping the ceremonial first puck to start your #DreamsComeTrue weekend? Doing it with your favorite Super Hero! pic.twitter.com/dnHodfgr8y

@ukfallstars The whole @atlgladiators team both on and off ice, supporters & anyone we met have been amazing. @Chris_Treft has gone above and beyond to make this a trip not only Ethan @team_mcclean will not forget but all those involved. Share price in tissues went up this week😉 pic.twitter.com/1RLet9nWhb

Even the Admirals made sure to stop by and say hey to the young Irishman!

Sometimes rivalries can take a break for a minute.

Special thanks to Chris Treft. Not only was he integral in making this trip happen, he also forwarded on the information so we could relay this special story to you.

There’s always one!! 😂😂@Chris_Treft I have to say this is how we will remember the guys - not only good hockey players but brilliant craic to be around and nothing was too much trouble. Ethan @team_mcclean thinks Justin is soo funny. #giantssuperheroontour pic.twitter.com/vl8y4Tsnag