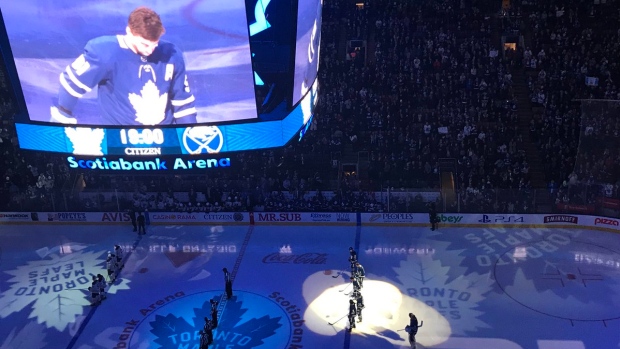 After a hostile reception in Long Island, Leafs fans are letting John Tavares know that he’s an appreciated member of his new team.

The hashtag #TavaresDayTO was trending over the weekend thanks to a movement of Leafs fans on social media, even receiving a co-sign from the mayor of Toronto, and perhaps this led the Leafs to change the order of their pre-game player introductions so that Tavares could get a pop from the crowd.

It sure was a remarkable moment.

From Oakville, Ontario. Number 91. John Tavares.#LeafsForever peel away from blueline leaving Tavares in spotlight for his announcement in starting lineup.

Tavares is already off to a fast start, scoring the first goal of the game in its opening minutes. Speaking to TSN’s Kristen Shilton during the first intermission, he was nothing but grateful to Leafs fans for their support.

Spoke with Tavares at intermission on @TSN1050Radio, of the #Leafs crowd support he said, “That was really special. It gave me goosebumps. That was a tremendous reception, doesn’t get much better than that.”

Tavares may have burned some bridges in Long Island with his decision to leave, but with this outpouring of support from Leafs fan, there's no doubt that he's fully appreciated where he is.