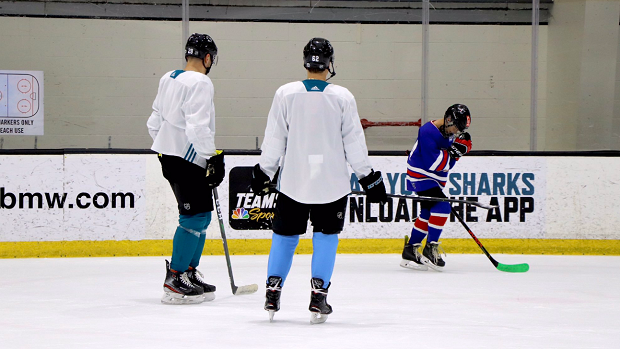 Remember the kid that stole hockey's heart last week when he moonwalked his way to stardom at the intermission of the Sharks' game versus the Islanders last week?

Aside from the celly, the goal was also one of the sweetest we've ever seen. If you missed it, here it is in all its glory.

Okay the spin-o-rama was cool and all BUT DID YOU SEE THAT MOONWALK CELLY 🕴 pic.twitter.com/Q1UbuWrtkF

A thing of beauty. Truly.

Today, the Sharks had Sam out to practice to show some of the guys how it's done, and we wouldn't be surprised if we saw one of them try out the moonwalk on the big stage sometime soon.

You know what our cellys need? More moonwalks.

So we brought intermission shootout star Sam to practice today to teach @MeierTimo and @Str8ToTheBanc a thing or two! pic.twitter.com/oA35AJI2dZ

Excellent coordination, but we're not sure that they'll be able to live up to how iconic the moment was when Sam debuted this move.