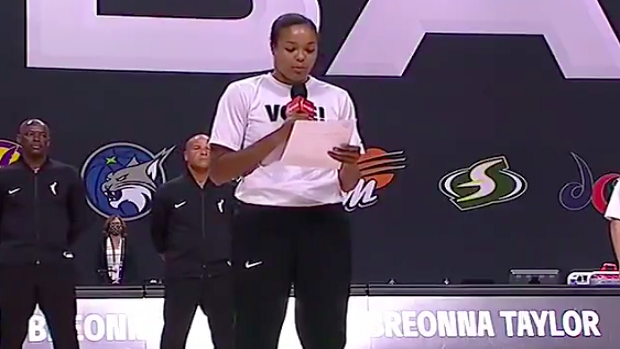 WNBA and NBA athletes are the ones leading the fight for tangible action against police brutality and systemic racism, and were heavily involved in the fight for justice for Breonna Taylor.

Taylor, a 26-year-old Louisville EMT who was studying to become a nurse, was fatally shot by police inside of her home on March 13th. There has been great outcry for justice to be served, but yesterday, the crushing verdict was announced. One officer was charged, but not with Breonna's death. Only with wanton endangerment for firing into a neighbour's apartment. The two other officers who were involved were not charged.

There was massive outcry at the heartbreaking verdict, and the WNBA, who has been fighting so hard for justice, was obviously outraged.

Minnesota Lynx forward Napheesa Collier read a joint statement on behalf of the league, which states they won’t stop fighting until justice is served.

"The result is outrageous and offensive. ... We won't stop pressing for full transparency and full and complete justice." @PHEEsespieces reads a collective statement about the decision in the Breonna Taylor case on behalf of the WNBA players. pic.twitter.com/sYIntzop3J

The decision is a heartbreaking and discouraging one, and we commend the WNBA on the way they continually raise the bar for social justice standards and fight for what’s right.