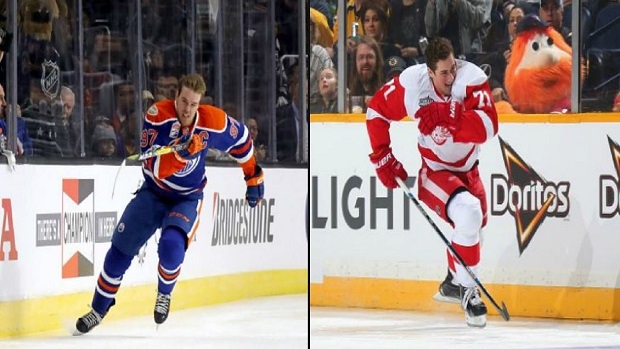 Last year, Detroit Red Wings rookie Dylan Larkin won the Fastest Skater competition during the NHL All-Star Skills Competition and set a record while doing so. Larkin’s time of 13.172 snapped Mike Gartner’s previous record of 13.386 which was set in 1996. However, a lot of fans started saying that Gartner still owned the record because he started at a stand-still while Larkin got a bit of head start.

Fast forward one year later and the same debate is happening within the hockey world, only this time there’s a different NHL rookie involved. Edmonton Oilers captain Connor McDavid won the Fastest Skater Competition on Saturday night, posting a time of 13.02. He knew that Larkin got a head start when he competed last year, so he wanted to try it the same way. However, after he was told he had to start at a different line other than the red line, he wasn’t able to break the record, finishing 0.183 of a second slower with a time of 13.31 seconds.

We want you to be the judge of this one, because it looks like McDavid might actually be the real record holder. The video below syncs Larkin’s attempt with McDavid’s and it might just change your mind when it comes to who actually owns the fastest skater record in the NHL All-Stars Skills Competition.

Hopefully they both earn a spot in next year’s event, that way we can settle this once and for all by having them go head-to-head in a race.

After watching the two races side by side, who do you think owns the NHL record for fastest skater in the NHL Skills Competition?