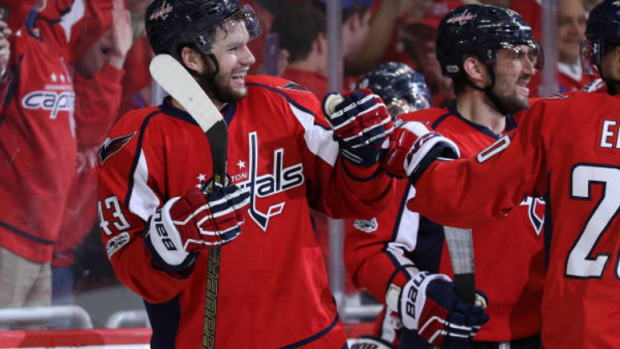 It may be hard for some to believe, but Tom Wilson was once a first round pick back in 2012.

While he doesn't exactly put up numbers as far as points are concerned, he's a valuable member of the Capitals fourth line as he provides energy through his relentless forechecking, his hits, his fights, and his blocked shots.

The Caps feed off of the energy he provides, and Thursday night his energy was rewarded as the Toronto native scored his first career playoff goal which turned out to be the overtime winner.

Tom Wilson's the hero in overtime as he gives Washington a 3-2 win and 1-0 series lead. pic.twitter.com/kEedrTXKMX

It's rare to see the fourth line for teams on the ice during overtime in a playoff game, but Barry Trotz clearly trusts Wilson and company.

The fact that Wilson got the winner is even more interesting and ironic when you consider Mike Babcock's comments about him before the series began.

Babcock on Wilson: "Nothing against Wils because he works hard and all that, but he’s not as big of concern as lot of people on their team."

What's more interesting, Wilson saw the comments on Twitter before the series even began:

Wilson acknowledged he saw this tweet. Said Babcock had a true point. https://t.co/n84qglu6iS

Babcock is completely correct, of course, but maybe Tom used it as motivation.  The comments weren't news at all before the series began, but maybe it lit a fire under Wilson when he saw them.  After the game, Wilson responded to the comments with this, just to let everyone know he saw them beforehand:

Tom Wilson's response to a tweet that quoted Babcock as saying he 'is not as big a concern' as others. (H/t @ bmcnally14)

If you think Babcock was a little too harsh, though, here's what Tom though about his comments:

Wilson on this quote: "Honestly, it’s a pretty true quote. He’s got a point.” https://t.co/n84qglu6iS

In the playoffs, though, anything can happen and anyone can be a hero.  We doubt Babcock will play Wilson any differently during the series even after his overtime goal, but we imagine the goal at the very least got Mike's attention.