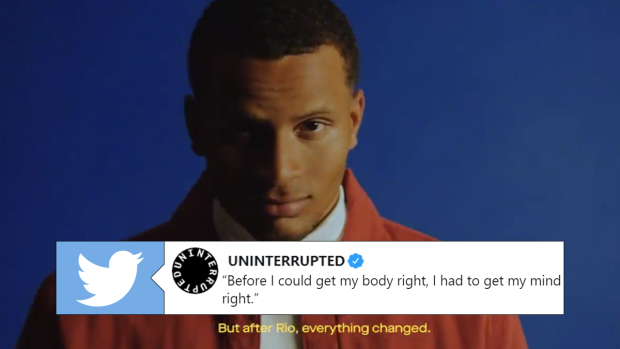 But athletes are humans too, and mental illness doesn’t take fame or fortune into account. Mental illness is something that can affect anybody, and it does so in a number of ways.

UNINTERRUPTED is looking to help end the stigma around mental health, and one way to do that is to get people talking. As a part of Bell, Let’s Talk Day, UNINTERRUPTED profiled three Canadian Olympians – athletes you may not expect to struggle in ways that they have.

First, there’s Andre De Grasse. The Scarborough native became a household name when he ran alongside Usain Bolt and the other fastest men in the world, winning a bronze medal in the 100m and 4x100m relay, as well as a silver in the 200m.

What many people don’t know is the struggle De Grasse went through following a hamstring injury that hampered him.

“Before I could get my body right, I had to get my mind right.”

Olympic medalist @De6rasse believes in talking to the people closest to you. @uninterrupted profiles De Grasse and his battle with mental wellness through injury.
#BellLetsTalk pic.twitter.com/IxtoNsftp7

Next is Alysha Newman, a pole vaulter and National record holder from London, Ontario. She encountered domestic abuse – something she never thought she would have to deal with – but as she explains she was “in love and blind”.

Newman opens up about how she dealt with the struggle to get back on track.

“I never thought it would happen to me, until it did.”

In another @uninterrupted profile, @alysha_newman94 shares her story of domestic violence, mental health challenges, and what she did to find a way through. #BellLetsTalk pic.twitter.com/pI5tXM63A6

The final profile features Lanni Marchant, a marathon runner who dealt with a personal loss that became too much. She opens up about her struggles, and how talking to people helped her to heal.

Olympic marathoner @LJM5252 🇨🇦 put off her mental health until a personal loss became too much.@uninterrupted profiles Lanni's story as she details the healing power of sharing. #BellLetsTalk pic.twitter.com/VDOUOuE7Fp

These stories emerge on Bell, Let’s Talk Day, but it’s important to remember that these battles are fought year round. If you’re going through a battle of your own, open up about it. Tell somebody who cares.

Today is Bell Let’s Talk Day. For every view of this video 👇, Bell will donate 5¢ towards Canadian mental health initiatives. Watch now and retweet this post to help us spread the word! #BellLetsTalk pic.twitter.com/mesNKy6uAe