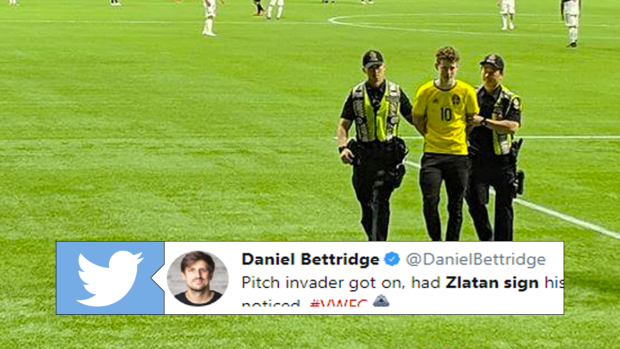 Zlatan Ibrahimovic is known for a few things. His world class skill as a striker comes to mind, as does his signature “Man Bun”, but more than anything else people likely think of his ego.

The guy LOVES himself.

Saying that, he isn’t necessarily a bad guy. He is just seeping with confidence, and while he has more fans than he can count, likely none are quite as big a fan of Zlatan as Zlatan himself.

He met one of those fans in a very unorthodox way on Friday night when a fan sporting a yellow Swedish soccer jersey came running up to the Swedish star. While this would maybe concern most stars, thinking they were going to get attacked, it quickly became obvious that this fan wanted something else. An autograph.

Pitch invader got on, had Zlatan sign his shirt and hugged him before security noticed. #VWFC

Some kid ran onto the pitch during the game to get Zlatan to sign his jersey. Of course, Zlatan obliged and calmly ✍🏼 then security came. UNREAL. #VWFC pic.twitter.com/V1vY4L8Pdk

@aftncanada @ZacharyAM @WhitecapsFC @LAGalaxy Classy move by @Ibra_official for signing this Swedish fans Jersey before getting the hook by Canada’s finest.. pic.twitter.com/qtyIqTU4VI

Apparently the bold move earned the fan respect at BC Place, as the Vancouver Whitecaps faithful chanted “Let Him Go!” as the unruly fan was being escorted off the field.

This guy just invaded the pitch, ran straight to Zlatan, got his autograph, and then left the field peacefully to a loud ovation and chants of "Let him go!" #VWFC pic.twitter.com/lMDB7oWHce

We do not condone this type of behavior, but hey at least no one got hurt and it gave the crowd something to cheer about!