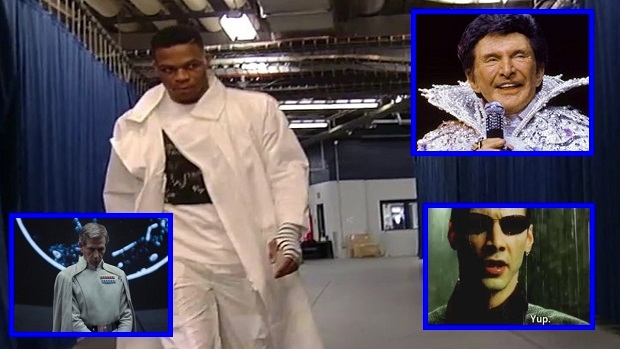 The Oklahoma City Thunder crushed the Los Angeles Lakers 114-90 on Wednesday night but the one thing people can’t stop talking about from Wednesday night’s tilt between the two is the outfit Russell Westbrook arrived in.

Known for his very unique fashion sense, the Thunder point guard might have topped all of his previous outfits with the one he rocked on Wednesday.

Rocking an outfit that looks like a collaboration between The Matrix and Star Wars, fans did not hold back once they saw what the 2017 NBA MVP was rocking beforehand.

Looks like the missing member of Prince's group Revolution.

As much as I love @russwest44 , he looked like this coming in today pic.twitter.com/2NRAwmqkKo

Although the Thunder picked up the victory, the outfit might be a one and done for Westbrook after he finished the game 8-for-22 from the field and 1-for-3 from the three-point line. Regardless of his stat line, it should probably be a one and done anyways.