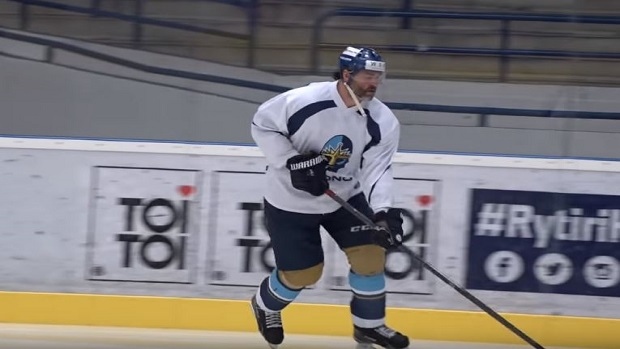 Jaromir Jagr is one of the greatest hockey players to ever play the game and he’s still not ready to hang up the skates just yet.

The 46-year-old was a member of the Calgary Flames for 22 games last season, but after registering just one goals and seven points in 22 games he was placed on waivers and was assigned to HC Kladno of the WSM Liga the following day. Jagr went on to play just five games with the Kladno Knights as he suffered an injury that ended his season early. However, that’s not keeping him down.

On Thursday, the five-time Art Ross Trophy winner was back on the ice rocking his Kladno Knights gear and let it be known that he plans on playing again this upcoming season.

Jagr is still recovering from a knee injury, but he plans on being ready to go for the start of the season on September 8.

“I believe that before the season begins I can prepare enough to be able to play the whole game. That’s at least in my plan,” Jagr told iSport.

“There are things I want to do, but I can not. Restrictions at my age are still there and there are more and more. However, I believe that once the leg and the whole body are strengthened, it will only improve. So far, I will not tell you how I’m about it because I do not want to lie.”

The 13-time NHL All-Star is a co-owner of Kladno, so his spot on the roster should be secure as long as he’s healthy enough to play.