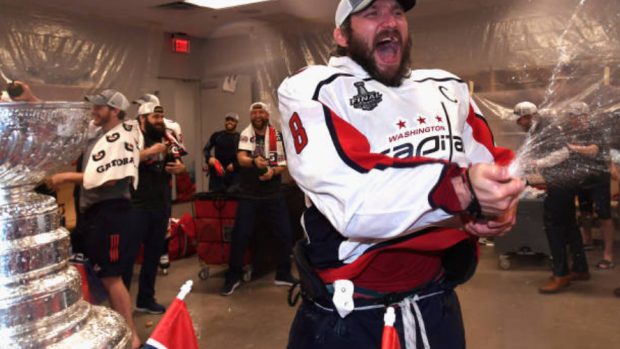 Fresh off his eighth season as the Rocket Richard winner, the Great 8 has achieved numerous accolades in his 14-year career, but one thing that still eludes Ovi is suffering the effects of too much alcohol.

If you saw the way he celebrated the first Stanley Cup in Capitals history, you might disagree, but according to Ovechkin himself, he doesn't suffer from headaches and restlessness.

Speaking with NBC's Roger Bennett from Men in Blazers in an exclusive 1-on-1 interview, Bennett asked Ovechkin for commentary his early days in his career, to finally winning the cup and all the celebratory shenanigans that came with winning hockey's ultimate prize.

"I've never been hangover." 😂😂 @ovi8 sits down with @rogbennett of @MenInBlazers to talk about the @capitals #StanleyCup parade, his first game in the League and more! pic.twitter.com/UI2rDiXnc0

In what was a well-publicized off-season for Ovechkin and the Caps, Ovechkin was the centre of attention during his wild summer journey that included doing pushups in a water fountain, Vegas nightclubs, and visits to Nationals Park and his homeland of Mother Russia.

Ovechkin famously pledged to Caps fans that the team won't "suck" this season. The captain backed up his word with a 51-goal season, notching 91 points and propelled the Caps to a Metro Division title.

In four playoff games so far, the reigning Conn Smythe winner has racked up two goals and two assists (and one knockout) after finishing second in playoffs points (15 goals, 12 assists) only to Evgeny Kuznetsov's 32 points (12 goals, 20 assists).