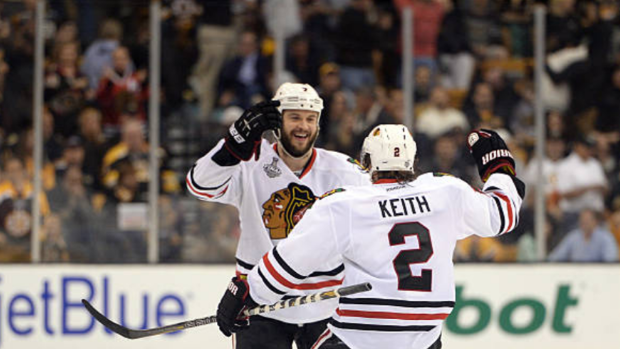 The Chicago Blackhawks aren’t what they used to be. The former dynasty enjoyed three Stanley Cups in the span of five years, leading many hockey fans to tag them as a dynasty, or at least the closest thing to it that the game has seen in a few decades.

They did so by riding a few key pieces. While Jonathan Toews and Patrick Kane are the two names that pop off the page instantly, there were two defencemen that were there every step of the way as well – Brent Seabrook and Duncan Keith.

Both d-men’s careers have had somewhat of a similar trajectory as the ‘Hawks franchise. When they were in their prime, so was the team. Now that they’re closer to approaching the final years of their career (Seabrook is 33 years old, Keith is 35), the ‘Hawks are sitting in the cellars of the league standings.

That doesn’t mean they can’t be making history, though. On Tuesday, the pair that has become synonymous with the United Center’s blueline will take NHL ice for the 1,000th time together in Winnipeg – something that no defensive pairing ahead of them can claim.

Brent Seabrook and Duncan Keith will play their 1,000th game as teammates tonight, the only pair of defensemen to do so in @NHL history.

Get ready with @NHLBlackhawks Pregame Live at 6:30 on @NBCSChicago!

Only 329 players have played 1,000 games in general, let alone with each other. Seabrook has played 1,035 games to this point, while Keith has played 1,025. The fact that 1,000 of those games overlap as teammates is incredible.

Wow!!! That is quite the accomplishment. 👍 Keith Seabrook

Congrats to both , thanks for the memories. Watching you guys was so much fun!

*Only pair of defensemen to hoist three Cups and play in 1k games together.