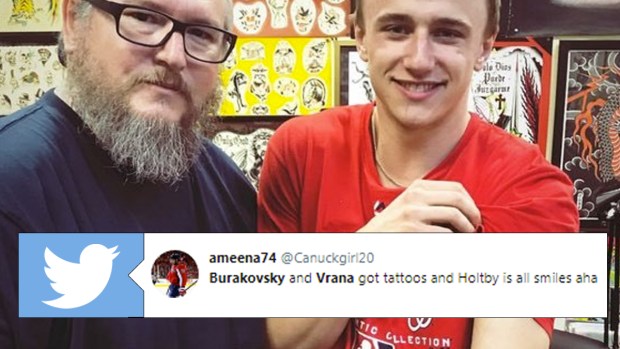 It seems as though the party may finally be dying down in Washington. Of course, we’ve thought that a few times already and clearly been proven wrong, but maybe we’re just comparing it to other Stanley Cup celebrations and wondering just how much more could possibly be left in the tank.

They went all out. From partying on stage with Tiesto, to swimming in fountains, to keg stands, to party buses, to… everything in between. Add tattoos to that list, as Jakub Vrana and Andre Burakovsky followed through on their promise and got tattoos memorializing the Cup victory.

Andre Burakovsky and Jakub Vrana stumbled onto the bus, danced, and said they were going to get Stanley Cup tattoos #ALLCAPS #StanleyCup pic.twitter.com/l8ieOE9fSb

Burakovsky and Vrana got tattoos and Holtby is all smiles aha pic.twitter.com/Im707o6ZlY

There’s no doubt they may have had a few drinks before that decision was made, and hopefully it’s not one they forget. But hey, the tattoos will be just about as permanent as their names etched onto hockey’s most sought after trophy.

They're not the only members of the Caps who had some ink work done after the historic win. Other members of the team who ended up getting a tattoo include Braden Holtby, Devante Smith-Pelly, Tom Wilson and T.J. Oshie.