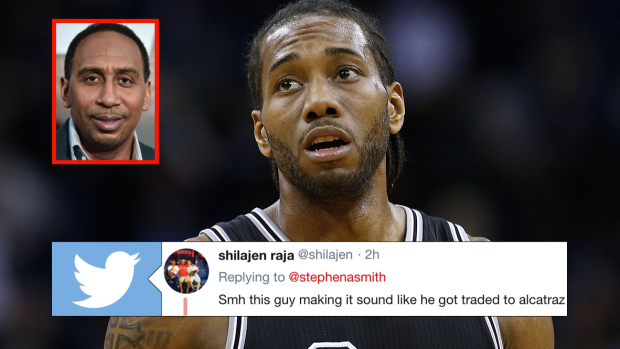 There have been a number of different reactions to the Kawhi Leonard trade, but there's one in particular that got our attention from ESPN's Stephen A. Smith:

This is what happens, KAWHI! pic.twitter.com/hyMqwjBpYF

The key phrase in Smith's statement is "exiled to another country", that country being Canada as Leonard is now a member of the Toronto Raptors.
Toronto is a wonderful city and ironically enough, DeMar DeRozan played a huge part in putting Toronto (and Canada as a country for that matter) on the map as a legitimate basketball city.

You’re speaking like Canada is some kinda hell hole. If Kawhi plays, raptors are legitimate threat to get to the Finals! Come on now Stephen A, stop disrespecting Toronto like that...

Please don’t protray being in Canada as a negative...it’s a great country and Toronto is a great city! He’s lucky to be here

This is an ignorant comment.... #Toronto is a better city and place to be than 90% of @NBA cities. Cleveland, San Antonio, Oklahoma, Portland, Minnesota, Indiana just to name a few

Lol canada isn't like...some diseased land where players are to be punished. The city is beautiful and its fanbase is huge and intense.

Terrible for Kawhi. Getting exiled to one of the best cities in the world to play for a team that won 59 games last year. The horror!

What’s wrong with Canada my man :(

Exiled? Have you been to Toronto?

Hey buddy we are THE NORTH. This guy is going to love Canada and he will shine. We invented the game. Dont under estimate THE RAPTORS

Toronto and Canada are both amazing #WeTheNorth

Exiled to a 59 win team? In a city that most players consider their favorite..

Toronto's a better city tho..

Raptors fans have welcomed Kawhi with open arms since finding out about the trade and regardless of whether he decides to sign a long-term deal or not, we're sure fans will be cheering on Leonard this upcoming season.