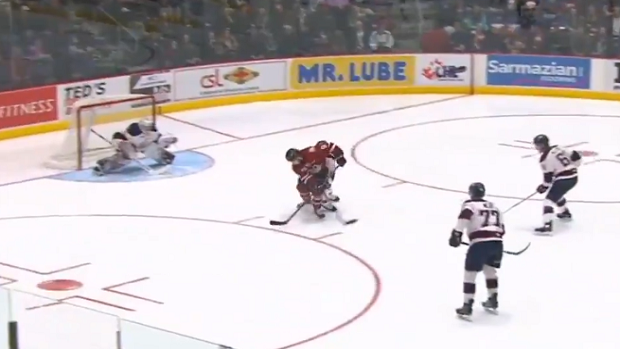 After going down 3-0 in the quarterfinal series to the notorious London Knights, they completed the reverse sweep and won in dramatic Game Seven fashion to meet the Saginaw Spirit in the OHL’s Western Conference Finals.

Then, not wanting to let Storm fans relax, they went down 3-1 in that series, allowing the Michigan-based team that boasts talent like Owen Tippett and rookie phenom Cole Perfetti to push them to the brink of elimination. Again, though, the Storm rallied back, and are headed to Game Seven once more.

This comeback is largely thanks to Storm forward and Montreal Canadiens prospect, Nick Suzuki.

Suzuki, who captained the Owen Sound Attack before being traded to a Guelph team that was beefing up for a Memorial Cup run around the trade deadline, has been playing like a man among boys in the OHL. The Vegas draft pick, who went 13th overall in the 2017 NHL Draft, put up a stunning 94 points in the regular season. This is impressive, but if you think regular season Suzuki is a beast, let us introduce you to playoff Suzuki.

The London, ON, native has recorded a ludicrous 29 points in over 16 playoff games, and in the fifth game of the Saginaw-Guelph series, recorded all four helpers in a 4-0 Storm win in Game Five.

Suzuki really came to play in Game 6, though, where he received First Star honours in a 5-1 victory to force Game Seven, and recorded what has to be one of the nastiest goals of the OHL season so far.

If you don’t believe us, take a look for yourself.

🚨 Gotta pick up my Jaw before I tweet this.@CanadiensMTL #Prospect @nsuzuki_37 just did that. Highlight reel please 📽️
We are up 3-0! #GUEvsSAG pic.twitter.com/k3bR5KEL9D

Apparently, Suzuki was buzzing like this all game long, and seemed to have the puck on a string at  points.

This kid is for real, and if you remember correctly, was a key piece in the trade that sent Canadiens captain Max Pacioretty to the Vegas Golden Knights.

From the looks of things, the Habs made a wonderful deal on that one.