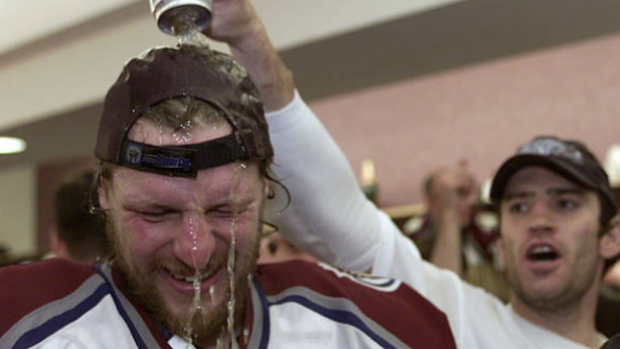 Winning the Stanley Cup for the first time is a childhood dream come true for anyone fortunate enough to have had the experience. The celebrations that follow can range anywhere from simply drinking champagne out of the iconic sports trophy, to swimming in city fountains (looking at you, Ovi), to eating hot dogs out of the Cup on a golf course (you already know who).

For former Edmonton Oiler, Philadelphia Flyer, Colorado Avalanche, and St. Louis Blues forward Shjon Podein, the first full Earth rotation after his one and only Stanley Cup was possibly the most unique.

After winning the Cup with the 2001 Avalanche, Podein spent the next 25 consecutive hours without taking off his equipment. We aren’t saying just his jersey, and not even just his shoulder pads… he was even wearing his skates for the whole 25 hours.

The fact was submitted as a response to our question “What’s the most random sports trivia fact you know?” and we had to check it out. Twitter user Dylan (@_DRatt8_) was bang on with the fact.

Shjon Podein kept all his equipment on for 25 hours after he won the Stanley Cup with the Avalanche.

In two separate Q&As done with ESPN and Eurolanche, Podein reveals that the wild, whacky, and… well… disgusting story is true. Apparently it was a dare made by former NHL player and coach Barry Melrose, who had previously gotten a player to do it for 24 hours.

Hahaha. It was disgusting! I kept the skates on actually. My wife and I went to restaurants, bars, diners, everywhere. I smelled real bad, but it was a dare from Barry Melrose, who had a player do it for 24 hours. I guess I'm still a kid at heart, ha-ha.

Podein revealed to ESPN’s John Buccigross the extent of just how gross it was, comparing the smell to rotten garbage on a hot July day.

Yes, I did wear my equipment, skates and all for 25 hours. My feet swelled to twice their size by the next night and dancing was not easy out at the bar and I smelled like rotten garbage on a hot July day. Funny thing was nobody seemed to be crowding me all night.

Podein played parts of three more seasons before heading over to Sweden to continue his career. Had he known the impact this dare would have had on his one and only Stanley Cup victory, particularly his feet, we’re not sure he would have done it again. Then again, it could also be considered one of the most legendary Stanley Cup celebrations of all-time.

…as long as you weren’t out there on the dance floor with him that night. Phew!