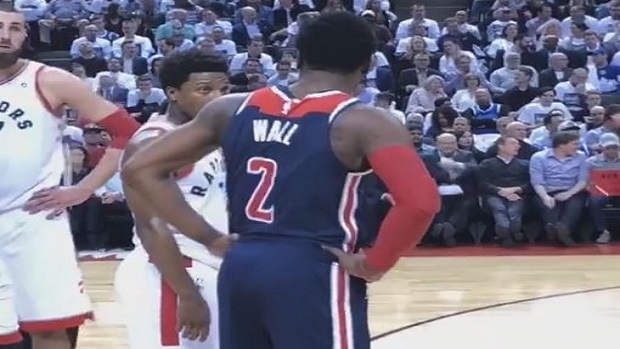 Drake is one of the biggest supporters of the Toronto Raptors and everyone tuning into the game knows when he’s there as he makes his presence known very quickly.

Whether he’s standing up alongside head coach Dwane Casey doing his best impression of an NBA head coach or he’s getting in the ear of an opposing player while he’s trying to inbound the ball, he’s one of the most vibrant fans in attendance and his star status puts him in the public eye. During Game 2 on Tuesday night in Toronto, Drizzy was at it early on as he got into the ear of Wizards point guard John Wall from his courtside seat.

If you’re not too sure as to what Drake was saying to Wall, Instagram user yunglank1 broke it all down in the comments section and here’s what he had to say.

“according to the 6 God, John will lose by a significant amount of points, being detrimental to the wizards playoff run, Drake refers to "6 buzz" as the local media outlet for the cities entertainment source, and will definitely have this clip on that page, adding on to the humiliation of a 20 point difference in the current game, john once recited the quote "we want all the smoke" leading to the much anticipated response from Drake referring to John as a "Bucktee", which is slang (short language) for a common Toronto fiend that searches for impure narcotics, such as xanax, meth, and probably K2 weed, leading to the conclusion that after all, John Wall does not or is not capable of handling "all of the smoke"

After keeping Game 1 extremely close from  beginning to end, the Wizards came out flat in Game 2 and trailed by nearly 20 points at halftime.