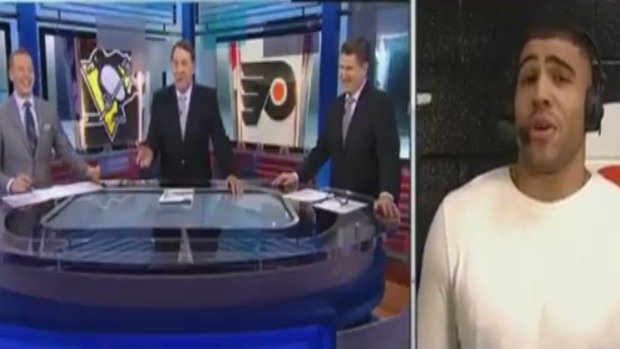 The Philadelphia Eagles are still celebrating their first Super Bowl victory in franchise history as members of the team are still making guest appearances in all sorts of places.

On Wednesday night, Eagles centre Jason Kelce and linebacker Mychal Kendricks were in attendance for the Philadelphia Flyers and the Pittsburgh Penguins game and the Eagles’ centre got things started by reading the lines to the guys ahead of the game.

There was a VERY special guest in the locker room tonight. #LetsGoFlyers

A post shared by Philadelphia Flyers (@philadelphiaflyers) on Mar 7, 2018 at 5:29pm PST

While Kelce did his best to pump up the players and the crowd, Kendricks ended up taking over the on-air interviews and got into a mini battle with Mike Milbury after the NHL on NBC analyst told him he’s from Boston and doesn’t like him very much.

Mychal Kendricks with the dunk pic.twitter.com/1TFnWKVVLd

After the Penguins tied things up at two in the second period, the crowd turned to the Eagles duo for some motivation and they did their best to get the crowd going.

Kelce gave one of the most memorable speeches of all-time at the Eagles’ victory parade, but he wasn’t able to spark the home team this time around as the Penguins went on to score four unanswered goals to take the 5-2 victory.