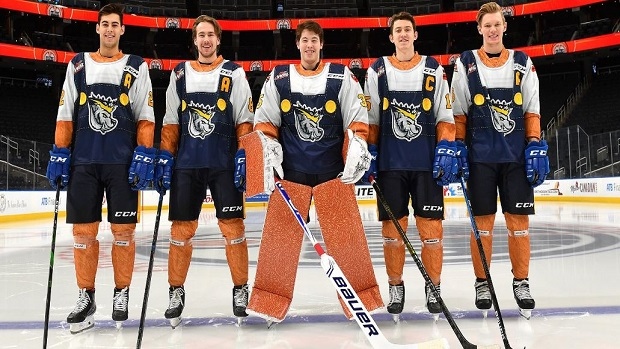 It’s the most wonderful time of the year in hockey as teams across North America have started hosting their annual Teddy Bear Toss Night.

This upcoming weekend, the Edmonton Oil Kings will host their Teddy Bear Toss Night when they take on the Calgary Hitmen, and on Monday afternoon they revealed their special edition jerseys they’ll wear for this year’s edition of the game.

The Edmonton #OilKings are all set for their #TeddyBearToss Night! 🐻👀 . (📷: @edmoilkings)

Not every team designs a jersey for their Teddy Bear Toss Night, as it’s all about collecting as many gifts as possible, but some teams go the extra mile and rock special edition jerseys that they later auction off for charity.

Come see them in person this Saturday at 7pm MT. Get your tickets here ➡️ https://t.co/7DJrfv64Be pic.twitter.com/pFn90Z54y7

Last year, the Oil Kings didn’t skimp on their jerseys as they hit the ice looking like giant teddy bears.

Click here for additional photos of the jerseys your #OilKings will be wearing for the 12th annual Teddy Bear Toss presented by @TheBrick:https://t.co/Sp3dDLtoPQ pic.twitter.com/gTmNZnCbpW

More teams should go all in on Teddy Bear Toss Night like this.