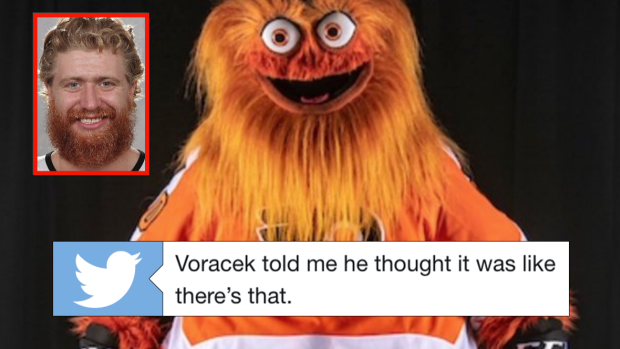 On Monday, the Flyers introduced the sports world to their new mascot, Gritty.

We've never seen a mascot like Gritty before and you can see why the Flyers' new mascot immediately went viral and is going to be talked about for a long time.

Speaking of being talked about, Jakub Voracek was asked about Gritty and his take on his team's newest mascot is what every hockey fan was thinking after seeing Gritty.

Voracek told me he thought it was like looking in a mirror first time he saw it. So, there’s that. pic.twitter.com/UEynt2o3jq

Come to think of it, we've never seen the two in the same room...

Is it me or is there a close resemblance between Gritty, the Flyers' new mascot, & current Flyer Jake VORACEK!! pic.twitter.com/6eunns1UkE

Gritty may look like Voracek, but as we saw Monday night, Gritty certainly doesn't have the same skill as the Flyers' star on the ice.