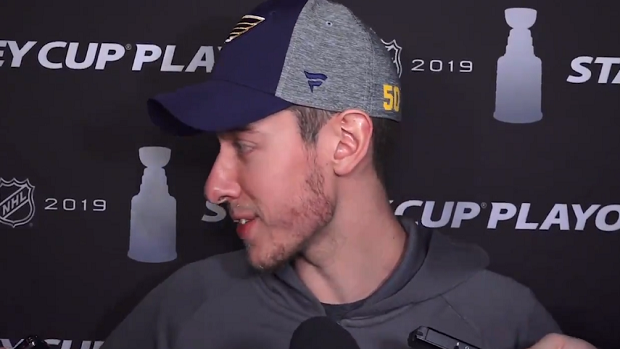 Jordan Binnington is quickly becoming one of the more fascinating characters in the NHL.

The Richmond Hill, ON, native and Calder Cup finalist has earned a reputation as a firecracker in all aspects of his play, and has offered hockey fans with complete gems of quotes, like this one.

Reporter: A lot of close games lately. Were you nervous?

Binnington: Do I look nervous?

He’s a pretty spicy guy off the ice, but also, on the ice.

We knew this before he got to the NHL, from this slash he threw at Texas Stars forward Joel L’Esperance when he was playing for the San Antonio Rampage.

Heading into the weekend like Jordan Binnington slashing Joel L’Esperance in the AHL earlier this year. pic.twitter.com/DR9bydsUgG

He proved this again in Game Four of the Stars versus Blues series, when he lost his temper at the tail end of the second period of the game, swinging at Jamie Benn Ben Bishop, acts which he was slapped with two separate penalties for.

At morning skate today, the incident camp up again.

Binnington was told that Dallas coach Montgomery said that he’d lost his cool, and responded in a pretty hilarious way.

Yup, he doesn't seem bothered in the slightest.

Hopefully, Binnington is able to keep the same amount of coolness in the series, which is now tied at two games each.