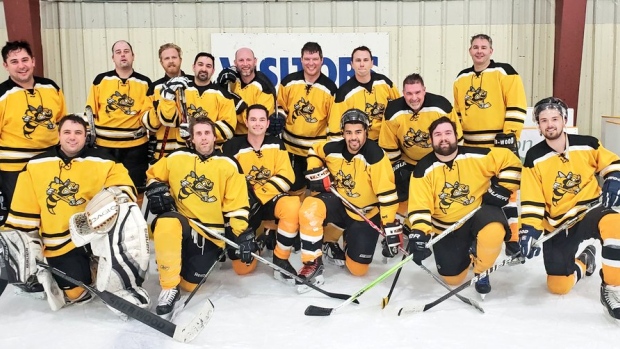 Puck Tales is back for the third chapter in our fan-submitted hockey stories series.

The gist of the series is as follows: if you have a hockey-related story from your beer league, minor-hockey or summer hockey league, then send them our way! Tell your friends, family members, or anyone you know that has a crazy story, and we'll share it here, on BarDown.com, if it meets our standards.

This week's episode comes from the Cross Bees hockey club out of Winnipeg, Manitoba, one of the more legitimate men's league teams you'll ever stumble across. One of their, David Robin, sent us a story about the bringing in a ringer for a game. But this isn't any random ringer that ripped it up in juniors or overseas once upon on a time.

The Cross Bees managed to recruit a two-time CFL rushing Champion and Grey Cup Champion, Andrew Harris to come buzz around on the ice for them.

The floor is yours, David…

"Every beer leaguer once had the dream of playing in “the show.”  Some of those dreams faded away over time and some are fresh like the cut from last week's high stick. Occasionally, you'll see that one dude who plays like there are scouts watching him from the stands.  You know, the guy with that dreaded tinted visor.

Regardless of where we’re at in our hockey lives, given the opportunity, any one of us would jump at a chance to play some puck with a current NHL'er or retired pro. It's safe to say, most of us have stories about playing shinny against an ex-AHL'er or an up-and-coming WHL prospect. We may have stories that involve an ECHL'er who was bumped from his playoff run, only to come back home and join his buddy's div 12 beer league team, the ringer who carries them to the final. Ugh... he’s the guy we all love to hate.

Well, this story is about our ringer.

The Cross Bees are in our inaugural season in the Adult Winter Hockey League that is based out of the Jonathan Toews Sportsplex/Dakota Community Centre in Winnipeg, MB. The Bees are a bunch of beauties ranging from 22 to 51 years old with a wide skill set (or lack of), but our love for hockey is strong. One thing that the Cross Bees have going for us is an off-ice Twitter game. The Bees are active on the social media platform that allows us to post everything from chirps, stats, to game-day starting line ups.  Most importantly, it helps us to connect with the hockey world. And so, it's thanks to Twitter that we landed our unique ringer, CFL's Winnipeg Blue Bomber running back, Andrew Harris! That's right, a pro football player.

Mike Cameron, centre for the Cross Bees, saw a JetsTV story that featured Andrew Copp (Winnipeg Jets) and Andrew Harris (Winnipeg Blue Bombers) talking about their hockey/football journeys that led them to where they are now:

And so, Cameron did what any beer leaguer in search of a ringer would do; he followed up by inviting Harris to suit up with the Bees.

Always looking to play some puck!

Forward/Center and I’m not picky ha!

The Cross Bees then slid into Harris' DMs and ironed out the details. Andrew Harris informed the Bees that he couldn't play right away because he was busy with the CFL awards and the Grey Cup festivities. He needed to wait for the CFL season to be officially over before he could lace up the skates with the yellow and black. However, we were able to set a date: Sunday, December 2nd at 7:20 pm vs. The Vikings. Harris would be inserted into the Cross Bees’ starting lineup.  Word got out and the team’s sponsor, Torque Brewing (a local brewery located at 830 King Edward St. in Winnipeg), insisted on sending extra cases of beer for our hockey club and Mr. Harris.

Finally, it was game day. We were all set…the ice was fresh, the Torque beer was cold…the Cross Bees were buzzin'…we just needed Harris to walk through the door.

Most of us were early for once, anticipating the moment that the 2011 Grey Cup Champion would arrive.  Finally, Harris opened the door to the dressing room, and in one of those rock-star moments, the kind you tell your grandkids about when you’re old and grey, he shook our hands as we welcomed him to the Bees.

All eyes were on the running back during warm up. The excitement in anticipation of the opening face-off was building. Harris was placed on the starting line with Keven Barron to his left and David Robin to his right. The puck dropped and Harris won the draw back to the Cross Bees' defence. Less than a minute into the game, Marco Peluso, an offensive-minded Dman crossed the Vikings' blueline, dished it to Barron who then dangled in the slot to get a shot on net. The Vikings' goalie mishandled the puck, leaving Andrew Harris, CFL running back, 2011 Grey Cup Champion, and Cross Bees’ ringer with the loose puck in front of the net and the first goal of the game.

Harris went on to add 3 assists helping the Cross Bees to their 7th win of the season. He scored 1G and added 4 points to the team’s stats. He was “Torque Player of the Game” and earned the honour of 1st star.

Let’s face it. It's not every day that a motley crew of beer-leaguers gets to play with a CFL star running back. This was our ringer…now he just needs to play 7 more games to be eligible for our playoff run!"

What the Helles... The #CrossBees Win! The Cross Bees had CFL Grey Cup champ, @andrewharris33 come play tonight. With a goal and three helpers, Harris pushed the Bees to a 6-3 victory earned him the Torque Player of the Game (@torquebrewing) 🍻 🐝 pic.twitter.com/vMhTQdxVkP

Good Ol’ Hockey game!! Thanks for having me out fellas 👊🏾 https://t.co/z7XT3SucVg

Not everyday you getting setup a CFL all star in beer league. pic.twitter.com/20ZCe5IHDP

It was a pleasure skating with Andrew Harris tonight. Man... that guy can play some puck! What a beauty. Thank you for coming out Andrew! Go Blue!!! #CrossBees 🐝 pic.twitter.com/bZvgRBvBRS

A special thanks to David Robin of the Cross Bees for submitting on what was surely an unforgettable game!

If you’d like to have the chance to be featured in our articles, please reach out to Grady.Sas@bellmedia.ca and tekeyah.singh@bellmedia.ca

**Of note: we’ll be reviewing each story and making sure they’re appropriate for our audience to read. If we feel your story is strong enough, we’ll be contacting you for the next step of the process. Only those who will be considered will be contacted. Please include your location and phone number when you submit your story.