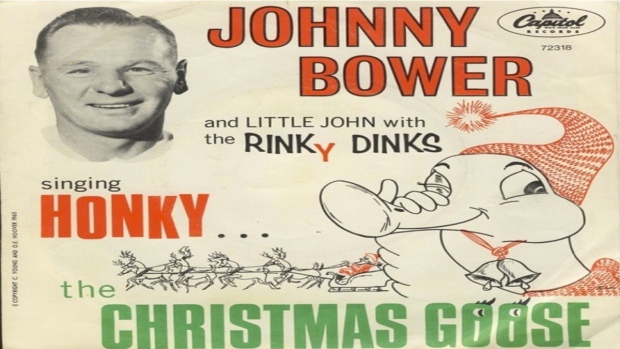 Johnny Bower played 552 career NHL games and had quite the impressive resume to show for it.

Over the course of his career, Bower won 250 games to go along with a 2.51 goals against average and a .922 save percentage, and also captured four Stanley Cups and two Vezina Trophies during that time. However, one of his accomplishments often gets overlooked and it’s because it has nothing to do with hockey.

In 1965, Bower received a once-in-a-lifetime offer as he was asked to sing “Honky the Christmas Goose”, a song for a TV show about a wild goose that ate too much and wasn’t able to fly but still manages to save Santa Claus at the end of it all. Bower knew he wasn’t the greatest singer, but he couldn’t turn down the offer after he found out the proceeds were going to charity.

Here’s the song Johnny Bower recorded with Little John and the Rinky Dinks.

Despite not being professional musicians or singers, the recording took the group just five takes. However, as impressive as that sounds, what happened after the record was released was even more impressive. Not only did the single reach No. 29 on the Canadian music charts for two weeks in December 1965, but it ended up knocking The Beatles’ “Day Tripper/We Can Work It Out” out of the most-requested spot, and went on to sell a total of 40,000 copies.

A few years ago, Bower was asked about his hit single and his music career, and he told the story as if it happened yesterday.

This video was taken nearly 50 years after his single was released but he still remembered the lines as if he recorded it the previous day.

It’s safe to say Johnny Bower is the only person who ever lived who can say they had their number retired by a franchise and knocked The Beatles out of the most-requested spot on the charts.