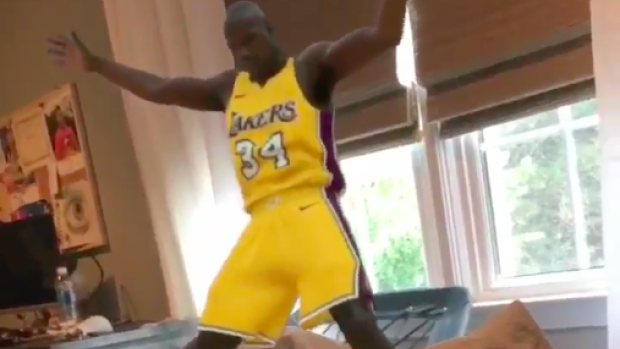 NBA 2K18 dropped in the United States today, and the 2K brand teamed up with Snapchat to spice up the special day.

The best one, hands down, is big Shaq diesel in his vintage Lakers gear, who's never been shy to get down and bust a move. Shaq is on the cover of the special "Legends" edition of the popular basketball game.

Pretty awesome Snapchat lens from @NBA2K. Karl-Anthony Towns showed it off on his Story pic.twitter.com/MdAE0jYPRr

If you're a Snapchat user, you can squad the code below and start fooling around for yourself.

It's #2KDay y'all! Pick up an exclusive #NBA2K18 lens (selfie and world view) and interact with #Team2K squad! Tweet us best ones! pic.twitter.com/hnWqkofPGL

The game will released in Canada on September 19, with Raptors shooting guard DeMar DeRozan gracing the cover.
(h/t For The Win)