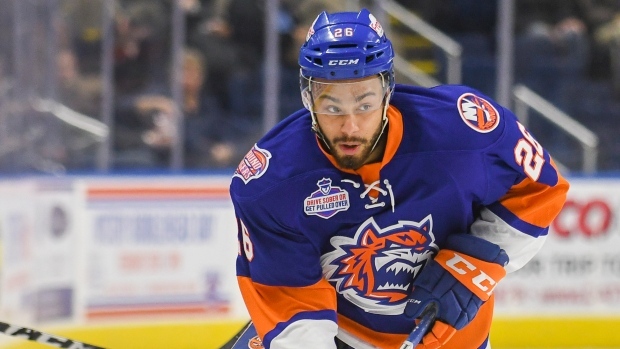 Josh Ho-Sang is a supremely talented hockey player that’s still trying to find his way on being an everyday NHLer.

But for now, the 21-year-old was recently a healthy scratch for the New York Islanders AHL affiliate, the Bridgeport Sound Tigers. After Ho-Sang sat out an AHL game on Wednesday, Bridgeport head coach Brent Thompson had some blunt thoughts about where Ho-Sang maturity levels are at in an article in the New York Post.

“He’s a baby. He’s a baby, he’s immature and he’s got a lot of growing to do. I’m excited. The upside of him is outstanding. He worked hard today, he’s been working really hard. We all make mistakes, we all have bad games. It’s how do we respond from those and what do we learn from them?”

Thompson cited Ho-Sang’s puck management as an area his game needed improvement, and that he needed to buy more into a team game and not trying to dangle everyone in sight.

While the Toronto product has recorded 4 goals and 8 assists in 15 AHL games, Thompson has juggled Ho-Sang onto eight different line combinations with the Sound Tigers so far this season.

Sounds a lot like the criticism that Kadri dealt with in his early days. Today, he's arguably the Leafs' second-best forward. https://t.co/KVVln0Q3uh

“When you start the year in the NHL and then get scratched in the AHL in the same year, it’s kind of … it’s kind of mentally tough," Ho-Sang explained. "I don’t think anybody can break my confidence. But it’s definitely put in a place where it’s not very good. There’s certain things I can do on the ice to remind myself of what I am and who I am. But it’s just tough when you have people getting on you and sometimes when everyone’s talking to you about the negative, you may look at yourself negatively.”

After the New York Post circulated the web, many pondered whether Thompson refered to Ho-Sang because of his age. Greg Joyce, the columnist that wrote the article, later clarified Thompson’s comments.

Whether he’s a “baby” and immature or young and immature. The assertion that, in 2018, a coach is still calling Ho-sang immature is striking #Isles

“Yeah, I’m only young, but I’m burning years off my NHL career. It sucks,” Ho-Sang explained to Joyce. “You want to be up top. For me, I didn’t look at it this way until this year. I was looking forward to hopefully my first [full] NHL season.”

Ho-Sang’s draft stock fell in the 2014 NHL Entry Draft all the way to pick 28, where the Islanders made him the third last selection of the first round. His talent alone projected him to go much higher, but teams cited attitude issues and an inability to play without the puck as to why he slipped on draft day.

This is not the first time that Ho-Sang has been in the spotlight for the wrong reasons, and it likely won’t be the last. Two years ago, Ho-Sang showed up late to the very first day of Isles training camp, which certainly didn’t do him any favours.

Considering that the Isles own a 24-15-4 record with him in the lineup, it seems like Ho-Sang and the Islanders aren’t exactly on the same page. Either Ho-Sang has to figure it out, or Garth Snow and the club need to move and hand Ho-Sang a fresh start on another team. The Islanders are filled with offensive stars, so perhaps Ho-Sang might flourish elsewhere where his offensive capablities would be better utilized.

We should note that Ho-Sang is one of the more interactive and interesting athletes out there, and isn't afraid to speak his mind on a variety of different topics. Young fans in New York really seem to like his presence, too.

Now, it's time for the Islanders to embrace Ho-Sang, and for Ho-Sang to iron out the kinks in his game and force the team to recall him.