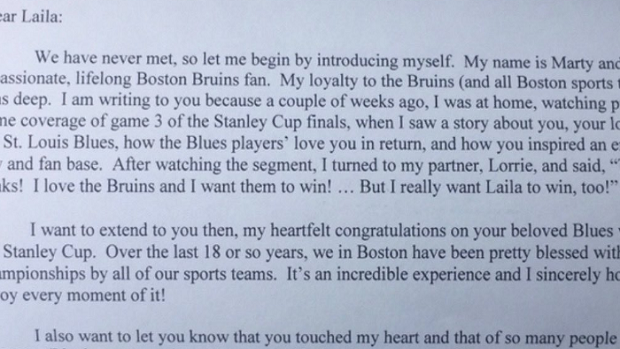 Losing is a tough pill to swallow.

Once the initial sting of losing wears off, though, it’s a little bit easier to come to terms with the circumstances and appreciate how great it was just to be apart of the action.

One of the greatest story lines from the St Louis Blues fairytale climb from last place to the Stanley Cup was their relationship with a young girl, Laila, who suffers from a rare disease called HLH. Laila captured the hearts of the entire hockey community, which definitely included Bruins fans, too.

Laila was in Boston for the Game 7 win, and even got a special moment on the ice with the Cup, and her own spot in the parade.

Boston’s mayor, Martin Walsh, was obviously pulling for his hometown Bruins to bring home the Cup. While it was obviously disappointing to him that they ultimately fell to the Blues, even he appreciated how special the team’s relationship with Laila was, and recently wrote her the sweetest letter of congratulations you can imagine.

We don’t blame him for being like the rest of the world, being so moved by Laila and her bravery, and we admire the sportsmanship and kindness he showed in writing this letter.

We also think Boston could spare a championship every now and then. They have a few.