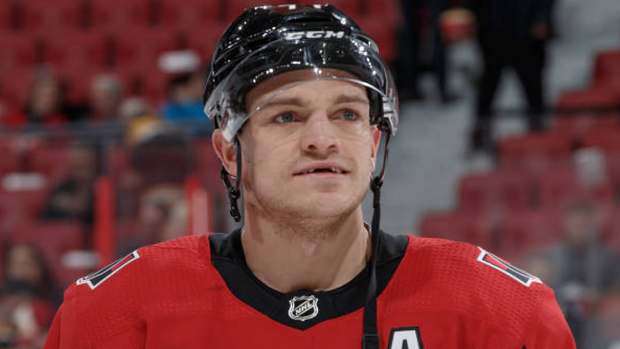 Sometimes, people have a hard time when kids look up to professional athletes as super heroes.

Sure, a lot of them are great humans as well as great athletes, but lots of people think they should only be looked up to as the athletes that they are, and not always for their lives outside of the course of play.

Last night, the Ottawa Senators' Mark Borowiecki proved that athletes can be right up there with Superman and Spider-man as far as heroics go, when he fully stopped a robbery during the Sens' day off in Vancouver.

Apparently, Borowiecki witnessed a car being broke into, and fully clotheslined the suspect when he was trying to flee on a bicycle with the bag he'd stolen.

Mark Borowiecki is returning calls from Vancouver police who require his statement after he foiled a robbery yesterday by clothes lining a guy on a bike who had stolen a bag. He then wrestled him down and retrieved the bag.

Mark Borowiecki broke up a robbery attempt in Gastown yesterday. Was able to get someone’s backpack returned by knocking down a person on a bicycle who had taken a bag. #Sens

Mark “borocop” Borowiecki told us last night he stopped a robbery on their off day in Van. Someone was trying to take a backpack out of a car and Boro told them to stop. When the guy charged at him he clotheslined him and got the bag back.

In short, Boro is superman. #Sens

Police confirm reports that Ottawa Senators player Mark Borowiecki assisted in retrieving property stolen from a vehicle in Vancouver and notifying authorities: 'We are grateful for Mark's assistance.' pic.twitter.com/oE5NEBGE6h

Did we just find a new favourite hockey player?!

The homegrown Ottawa player is in his ninth NHL year for his hometown team, and has already put up ten points this season. His previous high was just 11, so it looks like things are going great for Borowiecki in both hockey playing and crime fighting.

Have a year, Boro!