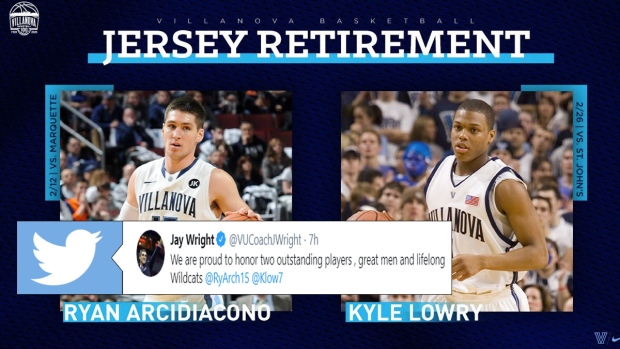 One conversation Toronto Raptors fans have had over the years is which player’s number should be the first to go up to the rafters if the franchise decided to retire a number. One name and number that instantly joined the conversation after the team won their first NBA title and is now a front runner is Kyle Lowry’s No. 7.

While the franchise has no plans of retiring a number anytime soon and this was all just chatter among the fans and media, the five-time NBA All-Star will see his jersey go up to the rafters later this month during a special ceremony at the Finneran Pavilion, home of the Villanova Wildcats.

Join us #NovaNation in congratulating these two Wildcats on a well deserved honor!

Lowry’s No. 1 will head to the rafters on February 26 when the Wildcats play the St. John’s Red Storm as part of the team’s 100th season celebration.

The Philadelphia, Pennsylvania native spent two years at Villanova and started 34 of the 57 games he appeared in, and averaged 9.5 points, 3 assists, 3.8 rebounds and 1.9 steals per game over the two years.​